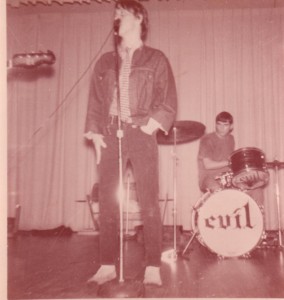 John Doyle, frontman of the band Evil… with drummer Doug Romanella in the background

John Doyle didn’t think his little local band from the ’60s really mattered. Until we met, he thought no one remembered a group called EVIL and their Miami top 10 hit “Whatcha Gonna Do About It”.

Up until his death on February 14, 2013, John still had trouble believing anyone cared enough to continue to write about the band, and continue to want to issue their once-forgotten demos. He refused to believe anyone appreciated the way he sang, and could possibly be influenced by him. To tell him that the long-forgotten acetate of “I’m Movin’ On” ranked the highest of any ’60s garage demo in the TeenBeat Mayhem! rankings would bring self-deprecating comments. That was John — happy to be remembered, but always unsure of whether he was worthy of the attention.

“He used to follow us around,” remembered Jeffrey Allen, the late drummer of the Montells, who would join John Doyle in Evil in 1967. “He even wanted to know what we had for breakfast!”

The Montells were a huge influence on Doyle, and countless others who lived near Southwest and Coral Park high schools in the mid-’60s. Doyle and his Evil bandmates embraced the Montells’ bad boy image, and kicked it up a few notches. Amazingly, they managed to win the Youth Fair Battle of the Bands in 1966, after destroying just about everything on stage, a la The Who. (It helped that WFUN disc jockey Dutch Holland was a strong believer in the group.) Their prize for winning that contest was a recording session at Bobby Dukoff’s studio, a session that resulted in five amazing songs being recorded in a single afternoon — “I’m Movin’ On”, “Always Runnin’ Around”, “I Know I’ll Die”, “From A Curbstone”, and “Short Life”. From a ’60s garage band standpoint, that may have been the most phantasmagorical afternoon of music ever laid down. One wowsville, jaw dropping song after another. For John Doyle, lead guitarist Stan Kinchen, drummer Doug Romanella, rhythm guitar player Al Banyai, and bassist Larry O’Connell, it was just another day, and one they’d just about forget through the years. More on that a little later.

Evil (named for an old blues song, not a comment on the band’s demeanor) went through a lot of upheaval in late ’66 and early ’67. Banyai, O’Connell, and Romanella split, joining bands such as the Shaggs, Kollektion, and Aboriginal Missionary. Replacing them were the aforementioned (and much missed) Jeffrey Allen on drums, Mike Hughes (from the Cliques) on bass, and John Dalton on rhythm guitar. Together with Doyle and Kinchen, they created a masterpiece of controlled distortion, in their remarkable reworking of the Small Faces’ “Whatcha Gonna Do About It” (a record Jeff Allen brought back from one of his trips to London). Unlike the marathon Dukoff session, where five songs were completed in a single afternoon, “Whatcha Gonna Do About It” was recorded at Criteria by Jim Sessody, the former Canadian Legends drummer, who knew exactly what he wanted, and made the band deliver maximum energy throughout a 13-hour session. Once rock ‘n roll perfection was achieved there was no time to record a B-side, so “Always Runnin’ Around”, from the year-old Dukoff sessions, was used for the flip — even though three of the guys on the recording were no longer with the group. Former pop singer turned entrepreneur Gary Stites issued the 45 on his Living Legend label, and managed to get Capitol Records interested in it. That was the beginning of the end. 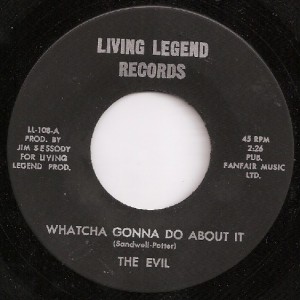 Living Legend release of Evil’s great Small Faces cover. The label read “The Evil”, but the word “The” was a mistake.

All of the guys were minors, so their parents had to sign the Capitol contract. When some of them refused, that put a strain on the band. So did the need to tour to promote the record, which not everybody wanted to do. Finally, club owner/manager Steve Palmer called Jeff Allen a bad name, which was the final straw. Evil broke up.

A few months later, the original line-up reunited for a one-time show at The Place, the 17-and-older club on Northwest 7th Avenue. Some of the guys were tripping before the show, and decided to stop at Army Navy on the way to the club. Someone had the brilliant idea of buying mini-skirts , and wearing them on stage! So here it was, 1967, years before David Bowie and glam, with the guys going up on stage in drag. As an extra added bonus, Doug Romanella wasn’t wearing underwear, so anyone looking toward the drums from a certain angle might have gotten to see a little more than they’d expected!

With the reunion done, Evil was done. What they didn’t know was Gary Stites went ahead and made the deal with Capitol — without their knowledge — even though the band was no more. Capitol made the foolish decision to edit out the glorious feedback portion in the middle of the song, pretty much destroying a lot of its sonic impact. John Doyle was floored to learn that his song actually appeared on the same label as the Beatles and the Beach Boys, and was issued in countries such as Thailand! 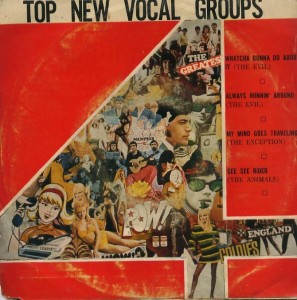 Evil gets a release in Thailand, on the same 7″ EP as The Animals, one of the all-time British Invasion greats.

Three of the guys who appeared on “Whatcha Gonna Do About It” went into law enforcement — Jeff Allen, John Dalton, and John Doyle. Doyle was injured on the job in the ’80s, and was forced to switch paths once again. He became aware of several bootleg releases that his songs were turning up on. He also discovered the two missing acetate discs from the Dukoff sessions, one of which was hiding in a hat box! That enabled some of the songs to be heard for the first time. Some appeared on a split LP with the Montells, which came out in the ’90s on the Australian label Corduroy . “From A Curbstone” and “Short Life” were issued for the very first time on a 7″ single, by Florida Archive Recordings (a division of the Swiss label Feathered Apple) in 2012. John Doyle insisted that every one of the guys on the record be contacted, to give their approval. He was the one that brought them all together, got them on board, and made sure everything was done right. 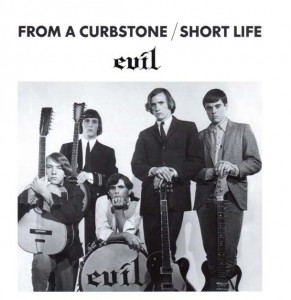 Next month (March 2013) will mark the first release on a 45 of the band’s most amazing two-sided demo. “I’m Movin’ On” and the super-moody flip “I Know I’ll Die” appeared back-to-back on an unreleased acetate in 1966, and will soon appear back-to-back on a legally-issued single — the first-ever release to bear the Limestone Records name. (Feathered Apple is actually putting it out, but is using the Limestone name as a tribute to the Limestone Lounge, which has played a huge role in bringing so many friends and former bandmates together.) Doyle was also the guiding force behind this project, but unfortunately he won’t be around to see it become a reality. He learned he had pancreatic cancer, just four days before Christmas 2012. Eight weeks later, he was gone.

John Doyle was a highly-sensitive man who’d survived some childhood traumas, which meant there were times he could be misunderstood… or could misunderstand others. Underneath it all was a heart of gold. When Jeff Allen could no longer care for himself, and lived out his final months in a nursing home, it was Doyle who would go and visit him, bring him music, and send him money for some basic needs. It was Doyle who drove all the way from his home in Northern Florida to Boca Raton last September, just because he heard I was invited to sing at the While We Still Can reunion. There Doyle had a chance to connect with many old friends, including Evil bandmate Mike Hughes. The highlight for him came when Jim Sessody — the guy who produced “Whatcha Gonna Do About It” — came up and said hello. “I can’t believe he remembered me,” Doyle told me. He was blown away that Sessody recognized him. In his mind, Sessody was a somebody, and Doyle was a nobody. That could not have been farther from the truth. 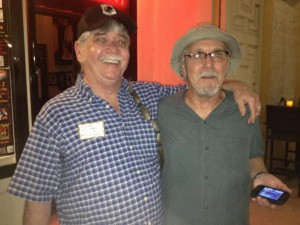 John Doyle, right, with former Evil bass player Mike Hughes, September 10, 2012, at the While We Still Can Reunion

I used to tell Doyle that he’s a legend, whether he wanted to believe it or not. Maybe not a Cover Of The Rolling Stone legend, or a guy that the Rock and Roll Hall of Fame would ever contact, but a legend just the same — one of the guys that took the groundwork that the Rolling Stones, Kinks, Yardbirds, Small Faces, and Pretty Things laid down, and shaped and molded it into something distinctly American, distinctly intense, and distinctly immortal. Listen to “I’m Movin’ On”, “I Know I’ll Die”, “From A Curbstone”, etc., and feel the power, the energy, the youthful abandon. Feel the power that the unsung heroes of rock ‘n roll such as John Doyle brought to their music. Realize that the loss of John Doyle is a huge one, from many different perspectives… but also realize that the beautiful noise that he left behind will ensure that his memory will live on. For a long, long time. 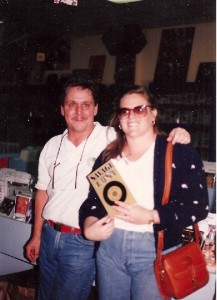 After my book, Savage Lost: Florida Garage Bands of the ’60s was released in 1992, I had a chance to appear on TV to promote it. I was a producer at the old Channel 6 in Miami, WCIX, and one of the shows that I did was Insight, a little-watched public affairs program. Host Dave Game decided to feature my book on an episode that he hosted, so I stepped out of the producer’s chair and went on camera to talk about Miami garage bands. In addition to helping Dave with the taped segments (which mention many local bands, and the WFUN-WQAM radio wars), I booked John Doyle to appear on the program to talk about his days with Evil. John appears in the third segment, but the band is also mentioned in the first (where you can hear a small portion of “Whatcha Gonna Do About It”.) I’d suggest that you watch all three segments in order, to really get the impact of what we were trying to do.

If you love South Florida bands of the ’60s, or the local radio stations of the day, this is definitely for you. This show only aired once — early on a Sunday morning — and has not been seen since. Watching it again brought some sadness for me. Not only did John Doyle pass away recently, but host Dave Game, my colleague for 14 years, died just a week earlier. I originally digitized this show as a tribute to Dave Game. Now it stands as a tribute to both men, who left this world way too early… during the very same week.

(Note: The program is in three segments, presented here in order)

Now that you’re here, check out the other posts on the Savage Lost blog.