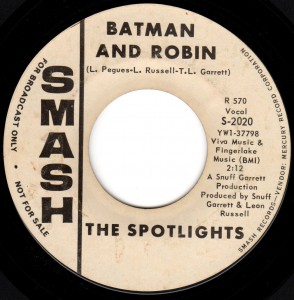 The Spotlights from Daytona Beach, aka the Allman Joys

Leon Russell came from Tulsa, Oklahoma, but one of his early endeavors featured two Florida legends — in their first-ever record release.  I remember, as a 9-year-old, hearing “Batman And Robin” by the Spotlights on the radio.   It reached #12 on WQAM and #13 on WFUN in my hometown of Miami, during the third week of February 1966.   What I didn’t know until recently is who the Spotlights were:  a group that would soon be known as the Allman Joys, featuring two brothers from Daytona Beach by the name of Gregg and Duane. 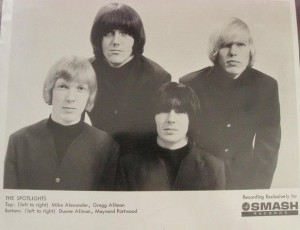 Introducing the Spotlights. Click image to view it full size.

Producer Snuff Garrett had the idea of creating an album of songs based on cartoon and comic book characters.  Garrett was coming off a great year, with several top ten hits as the guiding force behind Gary Lewis & the Playboys.   His musical director at the time was Leon Russell, who wrote and played on many Gary Lewis hits (including that memorable keyboard riff in “Everybody Loves A Clown”.)   According to Russell’s Tulsa cohort, J.J. Cale, Russell and Garrett recruited a group of musicians to record in New York, with the Spotlights being chosen as part of the entourage.  In a 1982 interview, Cale shared some of the details behind the project:   “Leon, Snuff , and I went up to New York City to cut this album. I was sitting in one room writing songs. Leon was in the studio leading the musicians, and Snuff was coming and getting the songs from me. He’d come in and say, ‘Write a song about Little Orphan Annie,’ and I’d start writing the song in the room and he’d take it into the studio where Leon would get all the musicians to play it. It was wild.” 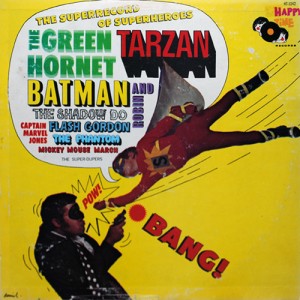 One of three covers for the Super Dupers LP, featuring, among others, Leon Russell and Duane & Gregg Allman

“Little Orphan Annie” wound up being released as the Spotlights’ second single, on the B-side of Cale’s “Dick Tracy”.   All the tracks from the New York sessions turned up on an album called The Superrecord of Superheroes by the fictional group the Super Dupers.  The album didn’t credit the Spotlights, or any of the musicians.  The Super Dupers LP came out on two different record labels, with at least three different covers.   No one could have ever imagined back in early 1966 that several future superstars were taking part in such a humble, disposable project.  Who knew?

The Allmans would cross paths with Russell again, though a mutual association with Delaney & Bonnie & Friends.  Gregg Allman and Leon Russell teamed up once more in 2011, joining Elton John in concert at Madison Square Garden.  It’s entirely possible that they may have reminisced backstage about the first time they worked together — on an obscure children’s album — and a song about the Dynamic Duo that started a Florida legend’s recording career.

(Some of the information for this blog post came from www.duaneallman.info)

Now that you’re here, check out the OTHER POSTS on the Savage Lost blog.