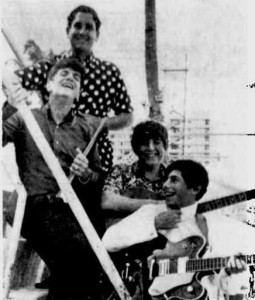 Four members of the Echoes Of Carnaby Street, 1966

Little has been written through the years about the Echoes Of Carnaby Street, and most of what has been written has been… well… false.    Most ’60s garage band fans first heard the band’s name — and record — through a Louisiana garage band compilation, which is strange, considering the group came from Miami Beach!   You might have also read that the Echoes of Carnaby Street was a recording alias for the well-regarded Miami band the Echoes (aka Echo).   Also false!   With three of the band’s members going on to get some notoriety in the music world, it’s more than time to set the (pardon the pun) record straight.

The Echoes of Carnaby Street began as the Tidal Waves, a group that had no trouble getting bookings.   Guitarist Mark Resnick’s father happened to be the executive director of the Monte Carlo and Shelborne hotels, so there would always be a place to play.  But this was not a case of some no talent hacks being given an undeserved break — the boys were actually pretty good, and made their way from the Surfside Community Center and one night stands at the 163rd Street Mall, to the Dinner Key Auditorium and all around the Florida Bandstand circuit.  Steve Palmer of the Florida Bandstand was impressed enough to take the boys into Criteria Studios to record two songs for his Thames label… under the coaching and guidance of former Canadian Legends drummer, and super-producer Jim Sessody. 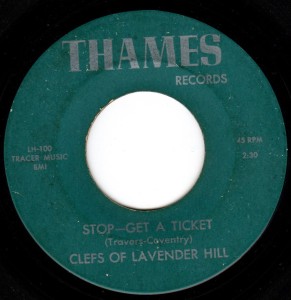 The release that put Thames Records, and Travis Fairchild, on the map

Palmer (and Thames Records) had a lot of success in 1966 with “Stop! Get A Ticket” by the Clefs of Lavender Hill, which was picked up by Columbia’s Date Records subsidiary.    Palmer believed in the Clefs, especially their frontman/chief songwriter Travis Fairchild.   For a year or so, Palmer had been passing around a tape of some of Travis’ compositions, offering them to the bands he recorded.   (Examples included “Bucket Of Tears” by the Squires V, and “For A Long Time” by the Tropics.)   The Echoes Of Carnaby Street didn’t just choose one Travis Fairchild song to record — they chose two — although one of them, “No Place Or Time”, didn’t have any lyrics yet.   No sweat for Mark Resnick, who scribbled out a set of words to go with Travis’ music, and voila, an instant collaboration!   “No Place Or Time” was immediately picked up by WFUN Radio, though it only managed to make its way to #52 on the Boss 79 survey back in September 1966.    Still, a pretty good showing for a group of Nautilus Junior High students, none of whom were over fourteen years old! 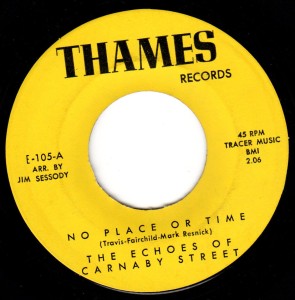 The group, then consisting of Resnick with Russell Frehling on guitar, Jeff Laibson on keyboards, Sammy Weiselberg on bass, and Eddie Marcus on drums, didn’t stay together long, despite the great credentials behind their record (and the fact that it rocks like crazy).  The Echoes of Carnaby Street were soon forgotten… until their unexpected inclusion on the aforementioned Louisiana Punk Groups From the ’60s compilation. 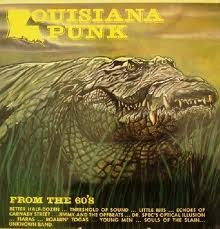 “What are we doing on a Louisiana punk compilation?” 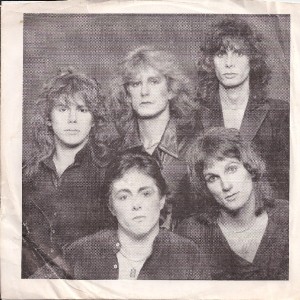 By then, the members had moved on, with a few of the guys (now all grown up) enjoying some success.   First, Mark Resnick, who emerged in the Miami-to-New York glam band Wowii, and its successor, Broken Heroes (a favorite of the Miami News’ influential columnist, Jon Marlowe).   Wowii has enjoyed a cult following over the past four decades, with many fans still singing their praises.   Laibson has a made a career out of mixing music with “emotionally evocative” paintings.  Frehling has achieved success in avant-garde music, particularly the area of sound installation, creating original soundscapes that are about as far as you can get, musically,  from his teenage band.   But in two-minutes and six-seconds, the time it takes to spin “No Place Or Time”… or the two-minutes and 15-seconds of the flip, “Baby Doesn’t Know”, it all comes alive again:   The Shelborne, the Dinner Key Auditorium, the recording session with Jim Sessody.   In the time it takes to spin a great little piece of garage band magic, the hopes and dreams of five 14-year-olds all come true… and at that moment, as the guys sang, there really is no place or time.

Now that you’re here, check out the OTHER POSTS on the Savage Lost blog.