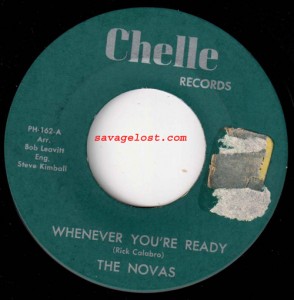 “Whenever You’re Ready” by the Novas, on Chelle Records

If you asked me to name my all-time favorite South Florida garage band records, I’d probably rattle off some familiar names – Evil, the Montells, et al.    These bands earned their place in the Miami band hierarchy, and the collectability of their music bears this out.   But that answer is just too easy and convenient, based on decades of digging those beyond-classic tracks.   Those records are just as wild, vital, and super-cool as they were in 1966-67, but I’ve lived a million miles since then.    Those records will always be close to my turntable, but they’re not the one – the (singular) one – that gets the most spins these days.   The local record with the deepest connection to my soul these days is neither wild nor savage.   It’s moody and world-weary, filled with turbulent introspection.   It’s a heat-warped, but much cherished 45 by one of the many bands from Palmetto High School in 1966.

Years back, I suggested “Whenever You’re Ready” by the Novas for inclusion on one of Gear Fab’s Psychedelic States Florida compilations.  The brighter-sounding flip side (“Please Ask Her”) was used instead.   Moody garage is the Rodney Dangerfield of the teenbeat record-collecting world:  it don’t get no respect.   My fellow Teenbeat Mayhem record-raters only gave the song a consensus “5”, on the 1-to-10 garage-o-meter scale.  Five isn’t a bad rating by any means, but it’s nothing special, either.  One of my roles on that rating panel was to balance out the guys who think a song such as “Gorilla” by the Shandells deserves a higher rating than a moody monster like “Sorrow” by the Sounds Of Night, or “Out She Goes” by Carroll’s Mood – not that there’s anything wrong with “Gorilla”, but the caveman thing will just go so far.   When life wants to get your attention, it will, and no cave can keep reality away.

All of which is a roundabout way of saying there’s no other record in the world like “Whenever You’re Ready” by the Novas.   The group was one of many teen combos at Palmetto, in a small scene that included future hit-maker Bobby Caldwell (then with the Nightwalkers) and bluesman Fleet Starbuck (then with the Druids).  Surely, the band — Kenny Wynn, lead guitar (later a member of the New York Square Library, with Palmetto guys including Brooks Reid);  Jim LeFevre, bass;  Rick Calabro, guitar;  John Bernard, drums — wasn’t serious all the time.  After all, they cut a demo with the title “Frog Eyeballs”!  But you wouldn’t know it from “Whenever You’re Ready”, which was dripping with teenage heartbreak, wrapped around some longing Zombies/Searchers harmonies… or at least they approached Zombies/Searchers harmonies.   Those English bands never released a mix this muddy, or lyrics that were this hard to decipher.   But that’s a huge plus!  It’s why the Novas fall into the teenbeat/garage category (a good thing, not a knock on them), and the Searchers – great band, but very few rough edges — don’t. 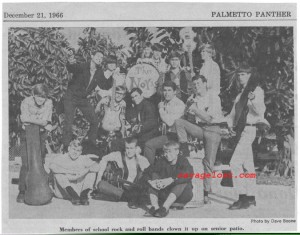 The Novas, and other Palmetto High School bands, from the Palmetto Panther, December 1966.  Thanks to Burt Compton.  Click the image to view it full size.

To understand why this record is so unique, just consider the lyrics, and the psychology that they’re wrapped in.   The first two verses revolve around a girlfriend who “never leveled” with the singer, and will never love him again.   She taunted him by saying “whenever you’re ready, I’ll be ready to love you”, but it was all a line.   Yet he was blinded by his love for her, and would cave whenever she’d speak those words.   By the third verse, she’s long gone, and our singer is with his new girl.   But he’s damaged goods now.   Instead of enjoying the moment, all he can think is “maybe someday you will hurt me too.”   Those feelings have become him.   As the song ends, he now turns the table by being the one speaking the words “whenever you’re ready, I’ll be ready to love you.”  OK, so songwriter/vocalist Rick Calabro hit a home run, lyrically, but musically this thing is just as powerful.   The harmonies give me goose bumps every time I hear this, even though I’ve known this song for years.   I never get tired of hearing it.

So why is this song so unknown?   It was one of just four releases on the Chelle label, and all of them are extremely hard to find.    I know of only two copies of the Novas record out there, including my warped copy with a damaged label.  It’s much scarcer than “It’s Trash” by the Cave Men, the best-known record on Chelle (and the best record ever to come out of Key West).   “Whenever You’re Ready” has yet to see an official reissue.   I included it on a private, not-for-profit mix CDR, “Jeff’s Moody Monsters”, that you might be able to find as a download on the web.   We also played it on an episode of Florida Rocks Again (#39), which you can download here.   But that’s it.   Even with the success of compilations such as Shutdown ‘66 and No No No, moody garage is still a largely unmined area, with gems galore waiting to be discovered.   Garage band fans love snotty songs about guys who tell their girls to take a hike, but sometimes the guy gets hurt too.   For those moments when the curveballs in life outnumber the good times, it is sure great to have records like this to remind us that we’re not alone.

The Novas, at the WQAM Tea Council Battle of the Bands. The Gas Company (pre-Proctor Amusement Co.) won the competition. Photo by WQAM photographer extraordinaire Bob Sherman.  Click the image to view it full size.

** THIS JUST IN from Novas guitarist Kenny Wynn:   “I spoke recently to bassist Jim LeFevre.  We’re trying to get the band together to play at Palmetto High 1966’s 50th class reunion in 2016.  Hopefully we can all still remain on the planet to do the gig.”    Thanks, Kenny, and thanks to the Novas.   Whenever you’re ready… I’ll be ready.