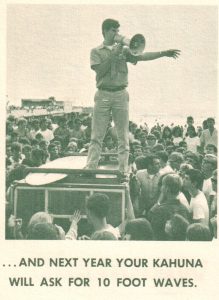 It all started when Roby Yonge – WQAM Radio’s famed Big Kahuna – had drinks with singer Jackie DeShannon at Martoni’s, a Hollywood record industry hangout near Capitol Records. “Jackie DeShannon got engaged to Bud Dain,” Yonge told me back in 1993.  “Bud had a record label, World Pacific, which was tied in with Al Bennett’s label, Liberty.  Bud and Jackie made plans to honeymoon in Switzerland.  I had just come back from there, so I told them where to go in Switzerland.  We became friends.” 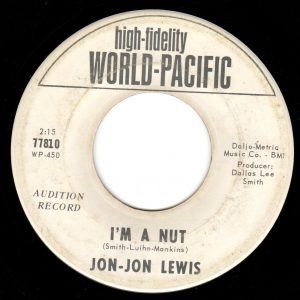 Friends often help friends, and Yonge introduced Dain to a Miami singer named John Luihn, whose stage name was Jon-Jon Lewis.  “I worked with Jon-Jon at the Bird Bowl Lounge,” Yonge told me.  In December of 1965 – the same month that Lewis and his group the Rave-Ons opened for the Dave Clark Five in Miami Beach – Bud Dain & World Pacific released Lewis’ debut single, “I’m A Nut”.  It didn’t do much nationally, but became a top 5 hit in Miami.   “It was produced by Dallas Smith, a guy who later worked with Canned Heat,” Yonge remembered.  “Smith drove me to the airport in Jackie DeShannon’s car,” further cementing the cozy ties between the label and the disc jockey.

Bud Dain turned Roby Yonge on to a young singer-songwriter, who had recently signed with World Pacific – a guy by the name of Bob Lind.   “I was the first dee jay in the country to play ‘Elusive Butterfly”, he remembered.  “We were on that record more than a month before it hit the national charts. “ 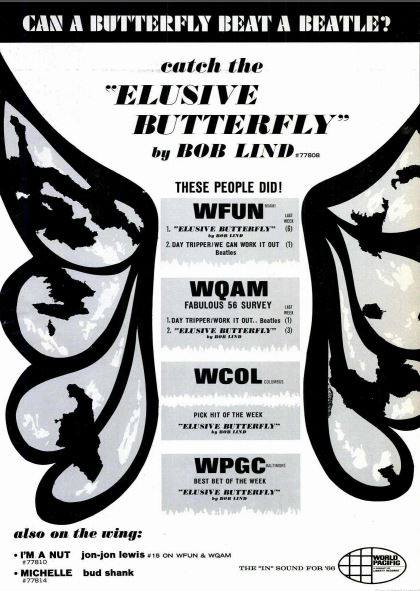 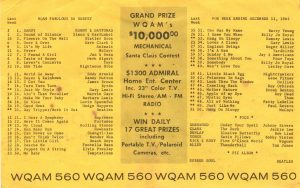 Indeed, WQAM’s surveys bear this out.   “Elusive Butterfly” was first listed as a Jim Dunlap pick hit, even though Yonge was the guy who introduced it.  (Music director Dunlap would assign the pick hits to disc jockeys, as he pleased.)   That was for the week ending December 11, 1965.   Five weeks later it went all the way to number one.  Meanwhile, Jon-Jon Lewis’ record took just three weeks to reach the WQAM top ten, peaking at number five on the same chart that showed “Elusive Butterfly” at number one.  (With the T-Bones coming in at number three, that gave World Pacific two songs in the top five, and parent company Liberty THREE songs!)   That same week, “Elusive Butterfly” finally debuted on the Billboard Hot 100, where it would later peak at number five.   “Elusive Butterfly” also made it to number one on rival WFUN.  (Click the images to view them full size.) 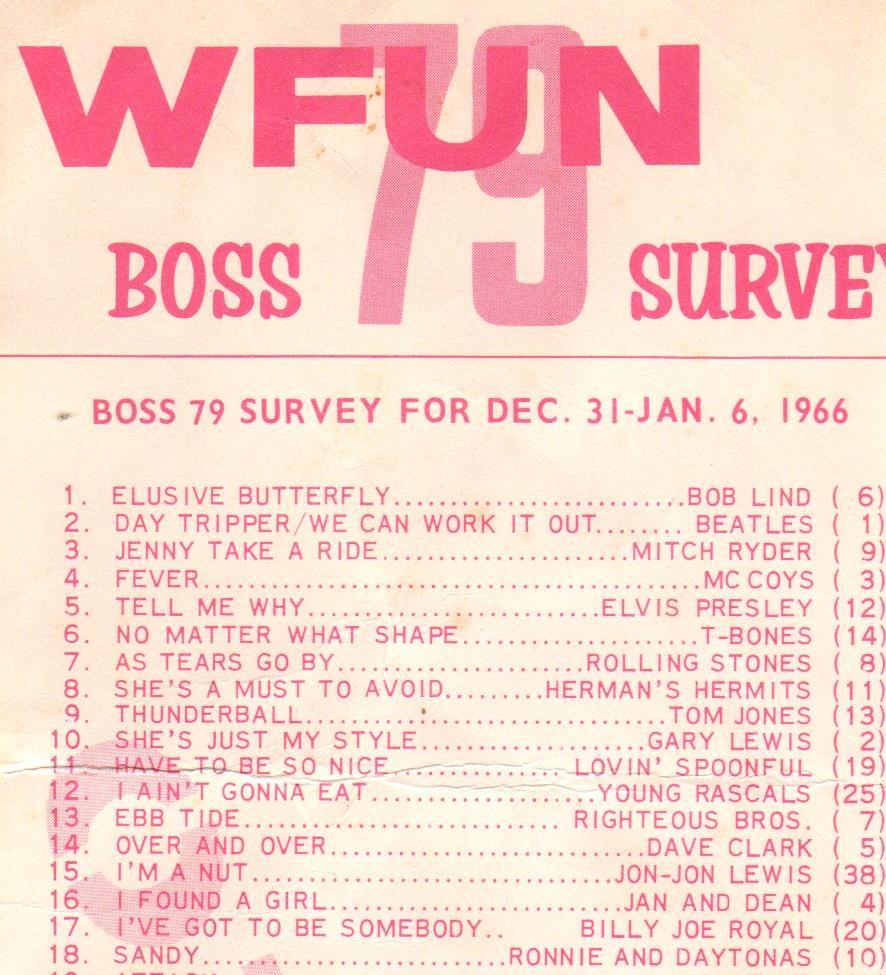 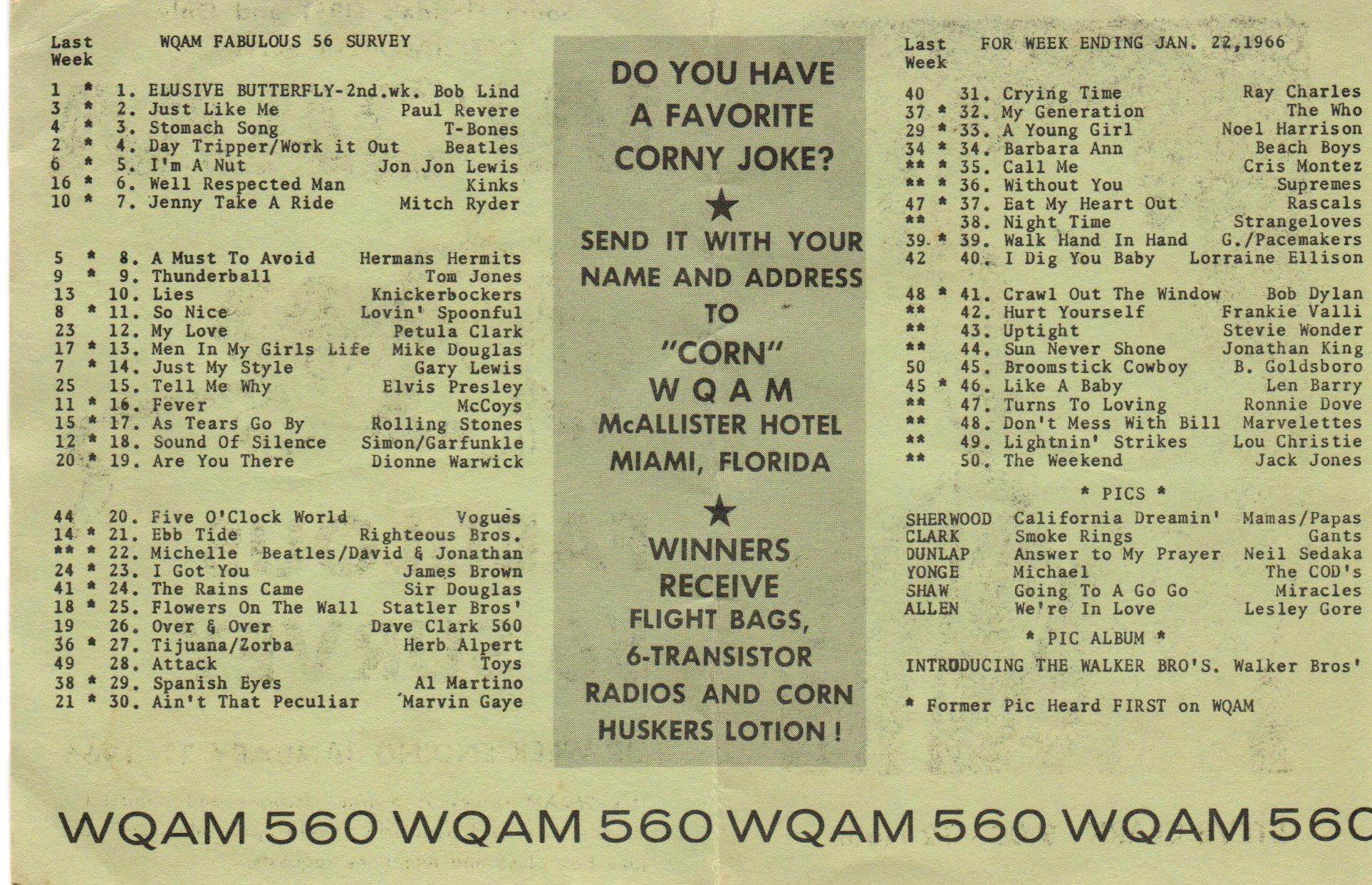 The record was a bona fide hit, as it deserved to be.   While Lind’s follow-up recordings didn’t do nearly as well, several of them deserved a much better fate.  His recording of “Mister Zero” is my second favorite song of all-time, and his music has been covered by hundreds of artists through the years.  To most he’s a one hit wonder, but in my mind he’s a superstar. 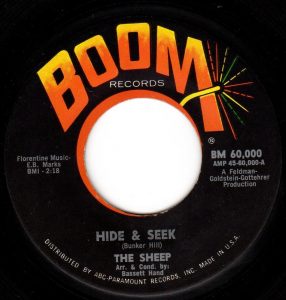 Which brings us to the question:  did Roby Yonge receive payouts to play the records Bud Dain was promoting?  “No way,” he said.  “I WAS offered payola once.  I was given $100 to play “Hide & Seek” by a group called the Sheep.  I gave him his money back!   The record was terrible, and I would not sully my reputation by playing it.”   (This was one of the few times I disagreed with Yonge.   I like the Sheep’s record, as well as their follow-up release, “I Feel Good”, which WQAM also played.) 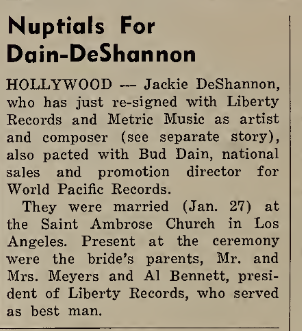 Bud Dain and Jackie DeShannon were married on January 27, 1966.   One year later, their marriage was annulled.  Roby Yonge died in July 1997; Jon-Jon Lewis passed away in December 2010.   Bob Lind lives in South Florida now, and is still going strong, performing and writing music and plays.  He’s had an impressive career, and those of us who grew up with WQAM and WFUN are proud to say our hometown stations helped him to get where he is. 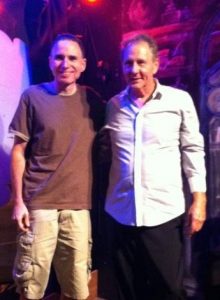 Above:  the author of this article with Bob Lind, November 2010, North Miami, FL

Now that you’re here, check out the other posts in the Savage Lost blog.