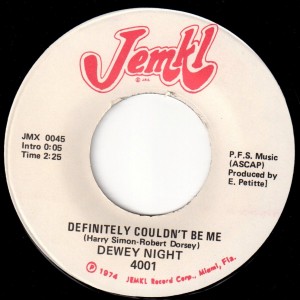 JEMKL 45 by Dewey Knight, whose name was misspelled on the label. Misspellings were common at JEMKL.

This cryptic Florida record label has baffled collectors for several decades now. In addition to its “initially” baffling name, its musical selections — here, there, and everywhere in between — have proven just as baffling. But where there are questions, often there are also answers.

JEMKL became a reality on October 11, 1971, thanks to North Miami entrepreneur Emile Petitte. One of his earliest orders of business was to work out a distribution deal for the Nashville label Bullet, a venerable independent label whose history stretches back to the 1940s. That collaboration led to a one-off 1972 single by Aardvark, with two songs written by Jeff and Felicia Cohen. Cohen’s name would later turn up on a 1974 release by the Kids, on another JEMKL-distributed label, Moonstone. These days Moonstone is best-known for “Super-Fi’Ci-Al’i-Ty” by the Unit III, a clumsily-named but collectable 1975 modern soul/funk single. 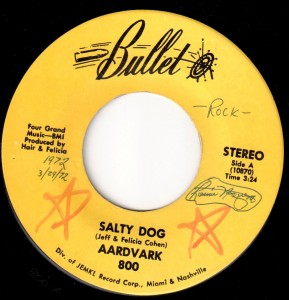 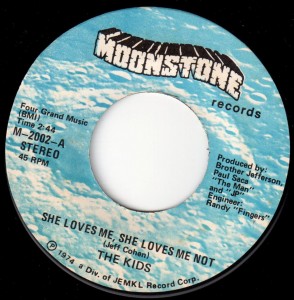 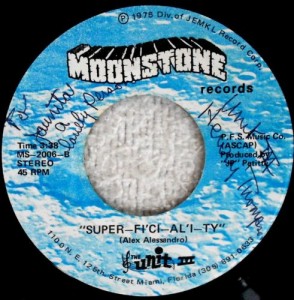 Moonstone’s most collectable 45. The Unit III also appeared on a 45, as Gwen Calloway’s backing band.

As for the JEMKL imprint, well, it was all over the map. Its first radio “hit” was by local country singer Don Jarrells, whose 1973 single “Everything But Mine” scored on Miami radio station WWOK. As you’d expect, more country releases followed, but just about anything was fair game with the label. For an explanation of Petitte’s philosophy, and the definitive word on what the JEMKL initials really stood for, we turn to one of its recording artists — Jeff Levine — whose specialty was “Flying Saucer” style break-in novelties, using bits and pieces of popular songs to tell a story.

“Petitte started the label with little knowledge of the business, so he learned as he went along. JEMKL supposedly meant ‘Just Easy Modern Keen Listening’, but it was actually an acronym for the Petitte family members: John, Emile, Marie, Kim and Lee.

Where Trip/Trip Universal Records by Bill Stith was a flat outright rip-off of artists (100{d3c861a8d6aef233eeacdca50b281691062a0afd274fde171092d4bcdfcb380f} funded by them, period), Petitte financed some records on his own, and made others ’boutique’ releases. In other words, the artist or songwriter would front the production and promotion costs, but it was stipulated in the contract that any monies laid out would be reimbursed before any profits were taken (should the record happen to take off). 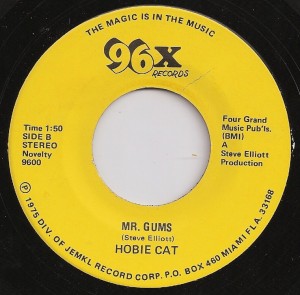 This is why you’ll find anything and everything on the label from pop, rock, country, easy listening and my novelty records. Emile put those out because I was his ‘volunteer helper’ and he wanted to give me a break. He also handled the manufacture of the 96X novelty record; Mr. Gums by Hobie Cat (a 96X DJ)/”Stash City High” (their novelty contest winner).”

Thank you, Jeff, for your insight into JEMKL. So now we know what those initials really stood for. Now let’s take a closer look at some of the label’s releases.

JEMKL used several different numbering systems over the years. It would be impossible to list every one of the vanity releases, but since Miami soul music is so hot, and JEMKL’s soul 45s are their most popular with collectors, I’m going to focus on the 5000 and 6000 series from the label’s catalogue. Not every record in the following discography qualifies as soul, but here’s where the more desirable releases would tend to be. 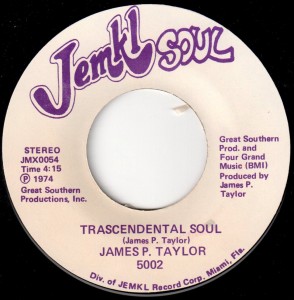 A few obscure 45s were issued on the “JEMKL Soul” imprint. How do you spell “Transcendental” again?” 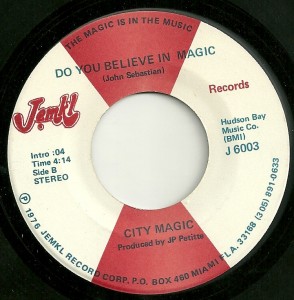 6001
JERRY THOMPSON*
Angelica/Country World (75)
*Despite sharing the same name and home state, this is not the Jerry Thompson who wrote “Urban Meadows” for the Rockin’ Roadrunners, and worked as a disc jockey on WLOF Radio.

6002
HARRISON FREESE
He Cares/Would You Still Bother
(Freese was a Fort Lauderdale police detective who had previously recorded teener-style 45s for the Roulette label.   This was also issued on Eagle 101)

One reason JEMKL singles are fun to collect is the ever-changing label graphics. JEMKL changed its logo and its label colors as often as it changed musical styles. Most JEMKL releases are relegated to “quarter boxes”, since they weren’t exactly hit material. Yet the label managed some true musical contenders over the years, particularly Tony Lampkin and City Magic. (Speaking of City Magic, I can use a reasonably-priced copy of their 45, if anyone has one for sale.)

Emile Petitte is no longer with us, but collectors will continue to discover the vinyl treasures (and trash) that he released over the years: Just Easy Modern Keen Listening! 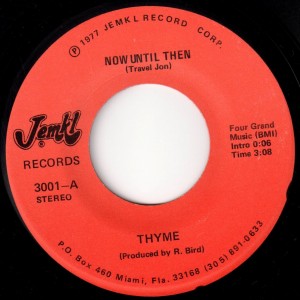 One of the later JEMKL releases. The label sure changed its graphics a lot!

JEMKL does not appear in my book Savage Lost, since it didn’t exist during our main time frame of the 1960s — but you will find plenty of other Florida record label stories and discographies within its pages.

Now that you’re here, check out the other posts and articles on the Savage Lost blog.