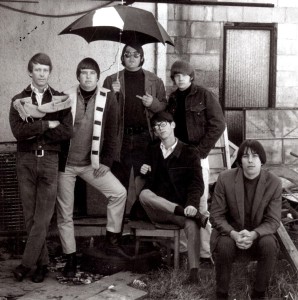 The Pensacola version of the 13th Hour Glass

Up until now, there has never been an accurate discography for the Florida Panhandle group 13th Hour Glass.  There’s a good reason for that:  there were actually two separate groups using that name, and both released 45s around the same time.   It was no coincidence that both lived in the Florida Panhandle, and it’s safe to say that the confusion hurt more than it helped.

In addition, one of the bands had a chance to record for a major label… almost.   Their name appears on the label, but outside of the singer, the band is nowhere to be found (and not surprisingly, has pretty much disowned this release).   This is what it was like to be a struggling young band (or in this case, bands), trying to navigate the treacherous waters of the music business in the 1960s.

The better-known, and longer-lasting 13th Hour Glass came out of a Pensacola group called the Coventry Sextet.  Bass player Robert Lewis suggested the cooler sounding name,  which was fine with vocalist/rhythm guitarist Tom Turner (replaced shortly after by Guy Pinney of the Laymen), lead guitarist David Dorman, drummer Rick Harris, and keyboard player Alan Hinrichs.  After Pinney returned to the Laymen, whose vocalist Tommy Ratchford then joined the Hour Glass, the group scored a local hit with a version of the Young Rascals’ “Baby Let’s Wait”.  This was more than a year before Ocala’s Royal Guardsmen took that song into the national top 40. 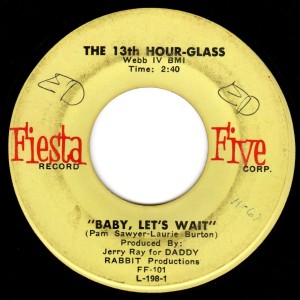 WHAT’S IN A NAME?

Just 140 miles away in Port St. Joe, Florida, six young men (most of them still in high school) were starting to make a name for themselves.   The guys traveled to Birmingham, Alabama to record an original tune (“Try”) and an updated version of the Coasters’ old hit, “Young Blood”.   The name they used:  The 13th Hour Glass. “They came along after we did,” said Robert Lewis of the Pensacola band.  “I guess they stole the name, because I came up with it in 1966.”   Shortly after, the Port St. Joe group (Clark Downs, Robin Downs, Chick Mathis, Larry Parker, Prasopsuk “Pook” Prasartthongosuth, and Jim Raycroft) gave up on the name, with some members emerging in a group called Sheffield’s Gate, which also recorded for the Prestige Productions label in 1967.   This time around they put their stamp on two British invasion favorites:  the Zombies’ “Tell Her No”, and “No Reply” (a Beatles song that was also part of the repertoires of Florida bands the Maundy Quintet, the Certain Amount, and the Last Words). 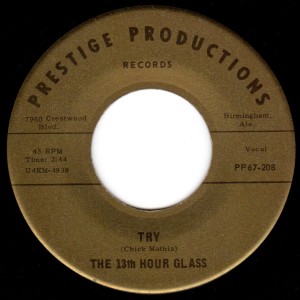 An original song by the Port St. Joe band that called itself the 13th Hour Glass.

GIVE ME MEMPHIS, TENNESSEE

The Pensacola crew was now free to use the 13th Hour Glass name, without confusion — or so they thought (more on that later).  Their manager/producer, Jerry Ray (known as Daddy Rabbit on WBSR Radio) took them to Memphis, along with their label-mates the Dickens and Little Johnny Dynamite.  The Hour Glass took advantage of the situation, recording many tracks, including the Spencer Davis Group’s “Keep On Running” and Buffalo Springfield’s “Do I Have To Come Right Out And Say It”, re-titled “Indecision”, since it was shorter and much easier to remember.   “Indecision” became a top 20 hit on WBSR (no surprise) but it’s their version of “Keep On Running” that really stands out to me.   It’s probably my all-time favorite version of that ’60s mod classic. 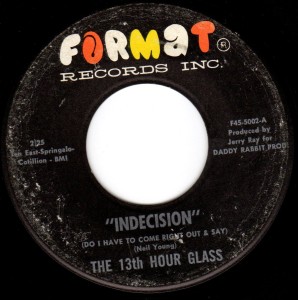 This version of a Buffalo Springfield song is probably one of the earliest Neil Young covers. A local hit in Pensacola in 1967. 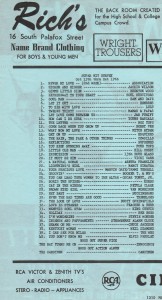 The 19th biggest song in Pensacola, during the second week of October 1967. Another Panhandle band, the Kords, was also riding high. Click on image to view it full size

While in Memphis, the 13th Hour Glass backed Milton, Florida soul singer Johnny Dynamite, on what would become his Format label 45,  “Baby (Wish You Were Here)” backed with “Midnite Hour”.  The deep soul ballad “Fruit From Another Man’s Tree” was also recorded, but I can’t find any evidence of it ever being released.  The band’s collaborations with Dynamite (real name John Adams Jr.) were excellent, and one day I hope to be lucky enough to find and obtain an actual vinyl copy of their record.  Robert Lewis also recalls the Dickens providing background vocals on some 13th Hour Glass tracks, and if you’ve ever heard the Dickens’ Left Banke influenced sound, you know what a good thing that is! 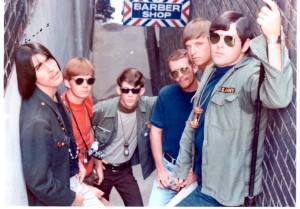 Disc jockey/managers such as Jerry Ray and Thom Smith had a lot of influence in the area, but the king of them all was Papa Don Schroeder, who scored big in 1966 with his production of James & Bobby Purify’s “I’m Your Puppet”.  Schroeder assembled a top notch studio band to back his roster of soul acts (which also included Mighty Sam, Oscar Toney Jr., Moses & Joshua, and Buddy Grubbs).   Schroeder seemed to take an interest in the group — or so it would appear to anyone who finds a copy of the band’s record on the national Bell label, which was credited to Tommy Turner and the 13th Hour Glass.  While the group prepared for their shot at the big time, Papa Don Schroeder had other ideas. 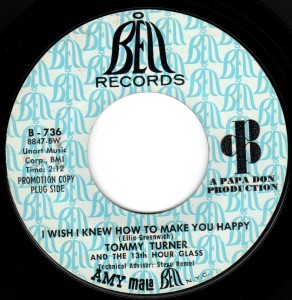 Tommy Turner and the… umm… umm

“Schroeder felt that Turner had a ‘marketable’ voice — he was also over 21 and capable of contracting without his parents’ consent — so (Schroeder) offered him an opportunity to record a song,” remembers Tommy Ratchford.   “Needless to say, we (the band) were overjoyed and eagerly awaited the session.  On arrival, we were informed that the only person necessary was Turner, as all other parts would be recorded by studio musicians chosen by Schroeder.  We were not particularly pleased at this turn of events, but had to be cool because this could have been Turner’s big break.  Events moved along, Turner cut his record, Schroeder got it released by Bell Records, and that was the last Turner or any of us ever heard about it.  We never learned the damn song, never played it on stage, and were never asked to by anyone… and no one that I know ever made any money on it.  Schroeder may have, but he never said and I guess nobody ever asked since all of us (including Turner) were kind of bitter about the whole thing.  When asked about the records that the 13th Hour Glass made, I never include that one as I do not consider it ‘honest’, if you know what I mean.” 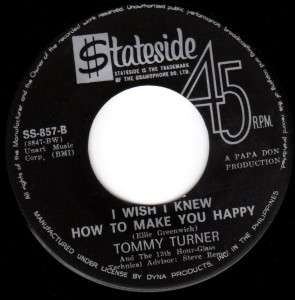 The Tommy Turner record was even released in the Philippines… but it wasn’t a hit.   It’s since received a little bit of attention on the UK Northern soul scene.

“WE NEVER RECORDED IT”

One more single was released following the Papa Don debacle, but there’s some question as to whether the 13th Hour Glass is actually the artist.   When asked about “Apple Cider”, originally by the California band People but popularized in Pensacola by another one of Papa Don’s bands, King James & The Royals, Robert Lewis said “I never heard of it.   We never recorded it.”   Adding to the mystery is the B-side — a remake of the Arthur Alexander/Beatles song “Anna” — which Tommy Ratchford had recorded three years prior with his group the Soul-7.  The only evidence of this single’s existence came from a couple of YouTube videos, which have since been taken down.  Here’s the really strange part:  the alleged 13th Hour Glass version of “Apple Cider”… and the Papa Don produced one by King James & The Royals… sound pretty much identical!   Could Jerry Ray have “taken” the King James recording, and put it out on his Format label using the 13th Hour Glass name?   And could he have “taken” the Soul-7 version of “Anna” and re-released it on the other side?   Jerry Ray passed away in 1989, so there’s no way to get his take on all this.   Just one more mystery in the life of a band whose name kept appearing on records that didn’t always feature them! 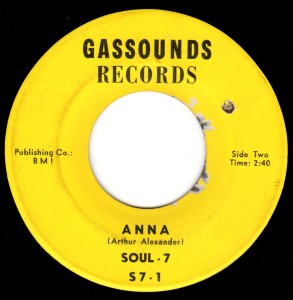 The band hung on for a while, despite the departure of several key members.   Drummer Rick Harris was drafted (and replaced by Larry Kennedy).  Then Tom Turner went back to Florida State to get his doctorate.   “Our manager at the time, Charlie Capri, decided to merge his two bands, the Hour Glass and the Phatons,” Lewis told 60sgaragebands.com.  “Alan Hinrichs, Dave Dorman, and I joined the Phatons.  The Hour Glass continued for a short time with Forrest Higgins (from the Laymen) coming over.  After about a year, Alan and I quit.” 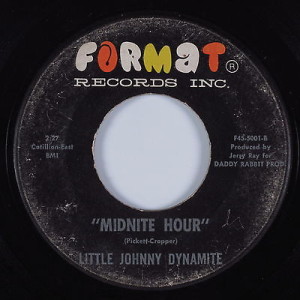 With uncredited help from members of the 13th Hour Glass

(as TOMMY TURNER AND THE 13th HOUR GLASS, though the band wasn’t a part of it) 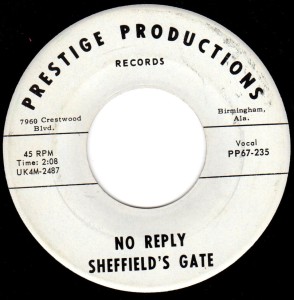 13th HOUR GLASS (the name was used, but this is likely King James & The Royals on one side, and the Soul-7 on the other) 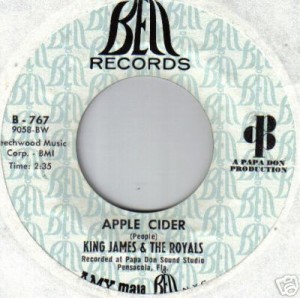 Was this Papa Don production “borrowed” for a phantom 45? 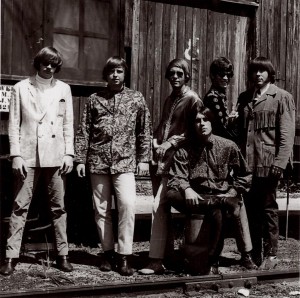 The 13th Hour Glass in Pensacola, 1968. Thanks to Robert Lewis for photos and information, and to Tommy Ratchford.  Thanks also to Mike Dugo and 60sgaragebands.com.