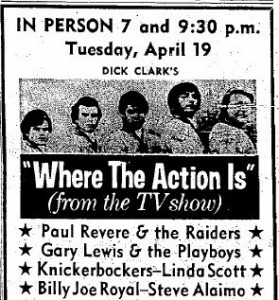 Paul Revere and the Raiders paid their dues around the Pacific Northwest for many years, before landing a starring role on TV’s “Where The Action Is”.   That exposure helped make them one of the most successful bands in the United States.   It also meant the start of a South Florida connection that would last for a long, long time.

Steve Alaimo was a pop singer who came close to the national Top 40 several times, but never was able to score an elusive million seller.  When Dick Clark’s Caravan of Stars came through Miami, with a sudden need for a backing band, Alaimo and the Redcoats stepped in like the pros they were, saving the day for Clark and his talented cavalcade.  Clark never forgot this and paid Alaimo back by making him the musical director on “Where The Action Is”.   For Alaimo, it also meant constant exposure to series regulars Paul Revere & the Raiders.

The Raiders had a great year in 1966, with hits such as “Just Like Me”, “Kicks”, and “Hungry”.   Unlike many bands whose albums consisted of hastily-recorded covers, the Raiders wrote a lot of tunes — GOOD tunes — that were not getting much notice tucked away on albums .  Raiders lead singer Mark Lindsay teamed up with Alaimo and future Raiders bass player Keith Allison, in an “Action” side project they called the Unknowns.   Their first single, a remake of the Raiders album track “Melody For An Unknown Girl”, reached #74 on the Billboard Hot 100, but did considerably better in Miami, peaking at #13 on WQAM and #25 on WFUN.  With both the Raiders and Allison signed to Columbia, and Alaimo signed to ABC, the guys had to keep their identities secret (thus, the Unknowns!)  Here we had three regulars on a network music show with a nationally-charted song… that they could not promote! 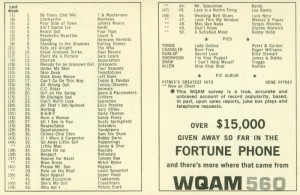 The Unknowns had the 13th biggest song in Miami in October 1966.  Click the image to view it full screen. (Thanks to 560.com) 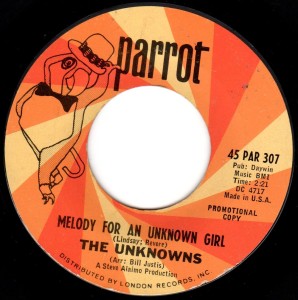 Don’t tell the folks at Columbia and ABC that the boys have a hit on Parrot.

For their second release, the Unknowns went with Alaimo’s own Marlin record label.   “Tighter” was a good rockin’ version of another Mark Lindsay/Raiders album cut, with a Lindsay original, “Young Enough To Cry”, on the B-side.   Unlike “Melody For An Unknown Girl”, this release failed to get airplay, even in South Florida.  “Action” was cancelled, Allison joined the Raiders, and Alaimo went to Memphis to record… and that was that. 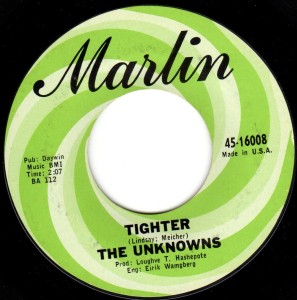 In 1970, Paul Revere & the Raiders (with Lindsay and Allison) returned to Miami, where they were booked into a Sunny Isles club called The Hump.   Alaimo came to see them, and joined them on stage, making for an Unknowns reunion of sorts.   But more importantly, Revere got to witness a local group called the Peach, which was starting to get some attention in South Florida.   The Peach would play a major role in the future of the Raiders. 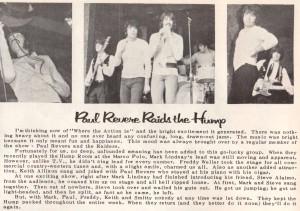 A successful week for the Raiders, at the Hump… as reviewed in Newsical Magazine.  Click on image to view it full size.

Just as major league baseball teams have farm clubs — a minor league system that brings young talent to the big club — Paul Revere & the Raiders had a farm club of sorts in Don & the Goodtimes, a Portland, Oregon group that always seemed to be one step away from the big time.  Raiders such as Jim “Harpo” Valley and Charlie Coe came out of the Goodtimes.   But by the time the ’70s rolled around, Revere’s new “farm club” was the Peach.   In 1972 he recruited keyboard player Bob Wooley and drummer Omar Martinez, both of whom had impressed earlier at the Hump.   Both would be on board when Paul Revere & the Raiders hooked up once again with Steve Alaimo, who was now vice president of TK Records.   The boys tried their hand at disco, with “Ain’t Nothin’ Wrong” (written by KC & the Sunshine Band) and “You’re Really Sayin’ Something” (a Bob Wooley original, with some help from Clarence Reid.)  The record failed to catch on, and the boys soon abandoned disco… though they would later enlist the services of a guy who’d previously recorded with TK Records hit-makers Foxy. 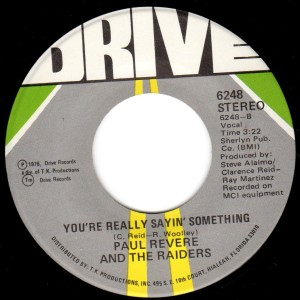 The Raiders turned to the Miami TK Records team to try to get a hit record. This B-side was written by former Peach keyboard player Bob Wooley and the great soul writer Clarence Reid. 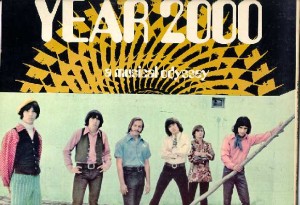 A former member of Miami’s YEAR 2000 would help to stabilize the group.

Revere shaped the band for the next two decades when he brought in Carl Driggs as lead vocalist.  Prior to Foxy, Driggs started to make a name for himself with Kracker, a band on the same label as Three Dog Night, with the same producer as Traffic and the Rolling Stones.   Kracker never did hit the big time, nor did earlier Driggs bands such as Year 2000 (South Florida favorites with an album on the Rama Rama label, and a 45 on Amy.) The addition of Driggs helped to stabilize the band.   The hit records had stopped, but the Raiders remained popular as a touring group, something that never wavered on and up to Paul Revere’s death in October 2014.

If the Raiders ever make it into the Rock & Roll Hall of Fame, it will certainly be the classic ’60s line-up that gets the attention… as it should.   But let’s not forget the decades of music, fun, and entertainment that the Raiders brought us after the hits dried up.   South Florida played a role in those years, even if it seems like just a footnote in the overall history of the group.   Paul Revere is gone now, and kicks just keep getting harder to find… but for fans of the Raiders, the music will always live on.

Now that you’re here, check out the other posts in the SAVAGE LOST blog.