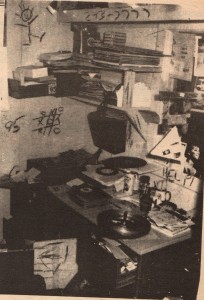 Bill Vermillion’s desk in 1969. There’s a reason it was so messy…

In order for Bill Vermillion to use his magic music director ears, somebody had to provide a steady stream of records to the station.  In a perfect world, each record company would have the means to provide every radio station with product — but in the ’60s, just like today, it was not a perfect world.  Take, for example, Motown, which sometimes provided spotty service.  Even though WLOF charted Motown obscurities such as “Hang On Bill” by Little Lisa (#39 on October 1, 1965) and “Three Choruses Of Despair” by Rick, Robin & Him (#18 on July 30, 1966), the label still missed sending some key releases — including their biggest hit of entire decade, “I Heard It Through The Grapevine” by Marvin Gaye, which would up peaking at a disappointing number three on WLOF’s chart for the week ending January 21, 1969.   (It was #1 on Billboard Magazine’s Hot 100 for 7 weeks.)

Picking up the slack were two Miami powerhouses — Campus Record Distributing, and Henry Stone’s Tone Distributors.  If Bill Vermillion was still here, I’m sure he’d give a shout out to Eddie Lambert and Brian Baker at Campus, and Bobby Puccetti (leader of Miami’s Birdwatchers band) and Milt Oshins at Tone.  Here’s what Vermillion wrote in February 1968:

“Miami appears to be turning into a two distributor town.  Both Campus and Tone are getting bigger with every passing week.  Except for the factory branches, it’s getting to the point where I can (get) 80{d3c861a8d6aef233eeacdca50b281691062a0afd274fde171092d4bcdfcb380f} of all records (based on this week’s playlist) from two distributors.  And on top of that, as they get bigger, my service actually seems to improve from them both.  Maybe that’s why they are getting bigger.  Tone just picked up the MGM line from what I’ve heard so maybe things will get better along that line.”

In November of that month, Vermillion counted more than 1,200 singles and 179 albums coming in to the station.  Here’s how the 45s broke down:

That’s a lot of 45s, and Vermillion listened to each and every one.  And did an air shift.  And served as an engineer.  And spoke to dozens of promo and radio guys (and record stores) each week.  And tried to have some kind of family life.  (I’m getting tired just thinking about it!)   No, Vermillion wasn’t the only reason WLOF’s legend continues to grow — but his dedication is reason number one.  Perhaps there were better-sounding stations out there, but WLOF — like its music director — was the whole package.   And speaking of packages, dig these: 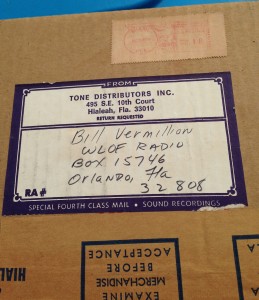 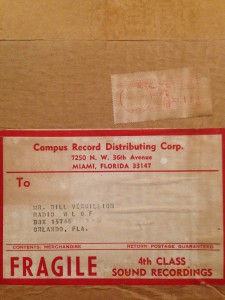 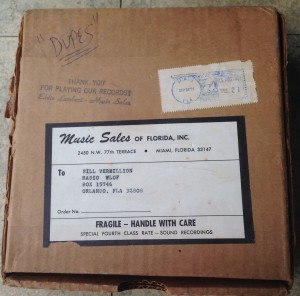 Music Sales of Florida also provided records to play, although not on the scale of Tone and Campus.

And just for fun, here are a few direct mail boxes that were sent to Vermillion and WLOF radio. 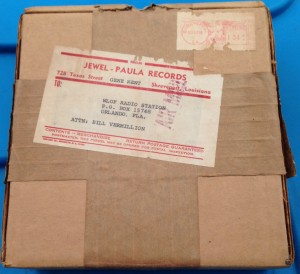 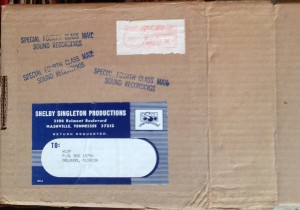 Shelby Singleton in Nashville provided copies of records on the SSS, Minaret, and Plantation labels. 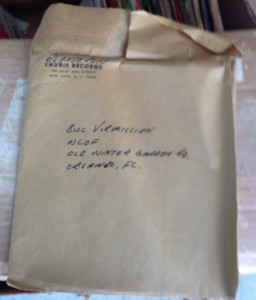 Here’s a small package from Laurie Records in New York.

Now that you’re here, check out the OTHER POSTS on the Savage Lost blog, including Remembering Henry Stone and his Tone Distributors. 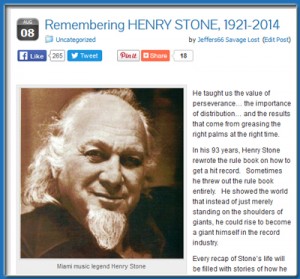