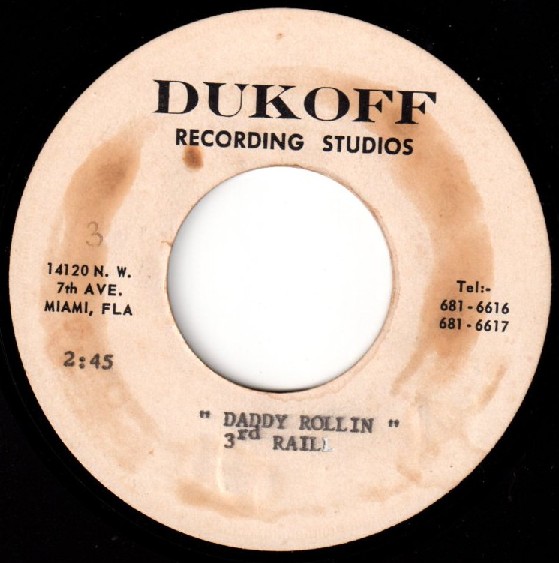 An unknown acetate by an unknown South Florida band of the ‘60s!

Those twelve words brought indescribable anticipation. I couldn’t wait to see it. To hear it. To document it. To spread the word to other collectors!

The name of the group was “3rd Rail”, a name similar to the Joey Levine-Artie Resnick-Kris Resnick studio group that scored nationally with “Run Run Run” in 1967 – but it wasn’t them. It also wasn’t the Third Rail studio group that had an oddball single on Cameo in ’66. This was a totally unknown, mystery band… or so I was led to believe.

Finally, I had a chance to see the acetate… and to hear it. It starts off with plaintive, Grace Slick style folk-rock vocals, until the rest of the instruments kick in, and off we go with a garage-style interpretation of electric folk blues with, for lack of a better term, acid rock guitar. The lyrics hint that this could be about heroin addiction, and in time the vocalist starts to sound a bit like Roky Erickson of the 13th Floor Elevators! Very, very cool, except for one thing.

The label might lead one to believe this was some unknown Miami band, but it wasn’t. Behind the 3rd Rail was a superstar from the days of street corner rock ‘n roll and teen-styled ballads. And this very song – “Daddy Rollin’” – would get a second life as the B-side of a million selling single!

I’m not sure why he originally chose to hide behind a group name, but there’s no mistaking that the vocalist on here is Dion DiMucci – and if you don’t believe me, flip over your copy of his 1968 comeback smash “Abraham Martin & John”. There it is – “Daddy Rollin’ (In Your Arms)”. It’s not only the same song, but it is also the same take as the Dukoff Studio acetate! From total obscurity, to a shelf in every record and department store in America!

One of many surprising B-sides of the ’60s

Needless to say, I was disappointed to learn that this was not the garage punk unknown (or in this case, acid folk unknown) that I’d hoped it would be. What’s not disappointing, though, is the music. Like “Fire Ball” by Mercy, “Lost My Love Today” by Harpers Bizarre (aka The Tikis), “We’ve Got A Groovy Thing Goin’” by Simon & Garfunkel, “Endless Sleep” by the Poppy Family, and “Reflections From The Looking Glass” by the 1910 Fruitgum Company, this was an example of a very cool garage or psych song hiding on the flip side of a major hit. Records such as this are a great place for new collectors to start, since they cost so little and deliver so much punch. The 3rd Rail acetate might be worth some bucks today, but it shouldn’t cost you more than a few dollars to own a copy of the same song/same take on vinyl.

Linking Dion with the 3rd Rail acetate may have been a surprise, but finding a tuff teenbeat sound bearing Dion’s name shouldn’t be. His late Columbia period yielded some great garage band-style rockers, with the best being “Two Ton Feather” (Columbia 43692, issued as Dion and the Wanderers). I’d venture to say that on a 1-to-10 scale, most would rank this as a 5 or so on the garage-o-meter. I know I like this better than more than half of the songs we ranked for Mike Markesich’s Teenbeat Mayhem book. Some other Columbia singles such as “Kickin’ Child” also deliver the goods, though I’d have to say “Feather” was his finest moment (at least from a garage-sound standpoint). 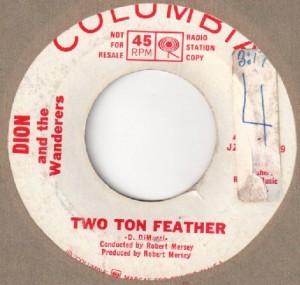 I can’t help but wonder who was backing Dion on “Daddy Rollin’” that day, at Bobby Dukoff’s little studio inside The Place on Northwest 7th Avenue. We know that promoter Steve Palmer and his sons would bring bands into the studio on a moment’s notice (including the Beau Brummels, during their 1965 Miami appearance – at least according to the Place’s Vince Palmer). So the mystery of the 3rd Rail has only been partially solved. I’d love to hear from anyone who was in the studio that day, who could shed more light on this. (For all I know, a personnel list might exist on some Dion reissue CD. Since I’m into vinyl, not CDs, I just don’t know.)

Songs such as “Daddy Rollin’” remind us of that old cliché about not judging a book by its cover – and coincidentally, Dion himself once recorded a version of that similarly-named Willie Dixon/Bo Diddley classic. If you think that Dion was just another teen idol blown away by the British invasion, you might want to dig a little deeper. You might just love the things that he stood for.

Click here to buy a copy of “Daddy Rollin’ (In Your Arms)” by Dion – the song, not the acetate!

While you’re here… check out the other posts on the SAVAGE LOST blog.