For every superstar, and even every one-hit wonder, there are countless performers standing on the outside, hoping their next performance – their next recording – will be their breakout. They give it their all, hanging on to their dreams year after year, even when it seems those dreams might never come true.

Tambi Garret was one of those who knocked on the door, hoping for something bigger, something better. This young lady who overcame so many obstacles couldn’t overcome the behemoth that makes or breaks so many careers: the music industry. 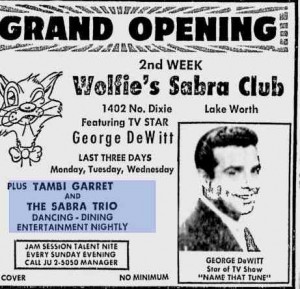 Our story starts with a teenage girl named Norma Jean Garrison, who headed south for Palm Beach County in the early ‘60s. As Tambi Garret, she was booked into area supper clubs, where she played the role of the “girl singer” who’d come out after the comedian and the band. Tambi excelled, though, and soon caught the attention of Fletcher Smith, a studio owner with a long, colorful history. Smith was a legend in the movie industry, designing miniature sets for many of the major studios. The battle scenes in Mutiny On The Bounty? Those were his. “He would have them built to exact replica, these sloops and frigates and whatever the hell they were,” recalled comedian Woody Woodberry, Smith’s protégé and friend, in an interview with the blog Classic Television Showbiz. “He had these explosive devices that would blow them up, and he had little puffs of smoke coming out of cannons.”

When Smith retired from films, he left New York City and opened a recording studio in Fort Lauderdale, Florida. Tambi Garret recorded at least five songs at the studio, on December 5, 1963. Two of the tracks, “Baby Doll” and “Chain of Emotion”, were released as a single on Smith’s StereOddities label. I’m not sure if the other three tracks, “Angel Face”, “Hold My Hand”, and “Thoughtless”, ever saw the light of day. All five songs were either written or co-written by Garret. 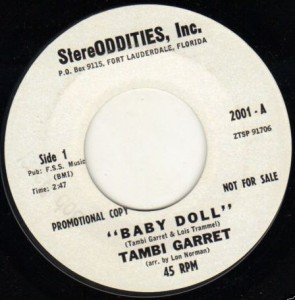 The record didn’t take off, but it appeared Garret’s career just might. A New York talent agent heard her sing at a club in Boca Raton, and decided to bring her to Manhattan. All was going well, until her management booked a date for her in Massachusetts. The folks there didn’t know that Tambi was stricken with polio as a child, in the years before Dr. Jonas Salk’s vaccine. According to a newspaper report, the folks there got cold feet, and cancelled her appearance. Instead, she was booked into a club called The Living Room, where she played to rave reviews… and soon was signed to a contract with Ascot Records, the United Artists-distributed label best known for its hit records by Manfred Mann. 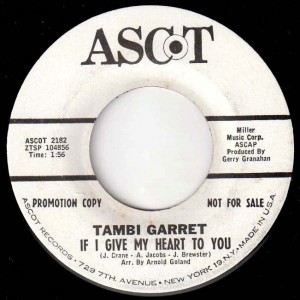 Tambi makes it on to a nationally-distributed label.

Tambi’s first single for the label, “If I Give My Heart To You” b/w “You Were Mine For Awhile” was produced by pop singer/A&R guy Gerry Granahan. Both sides sound a lot like Brenda Lee, and to be honest, the sound was a little dated for 1965. It was on the follow-up single, “Leave A Little Love”, that Tambi really showed what she could do. This is the track that has received some Northern Soul action through the years (as has a version of the song by Patti Austin), and it’s my opinion that this was far and away her best recording. Unfortunately, it failed to dent the charts, and by mid-1966, little was heard of Tambi Garret. 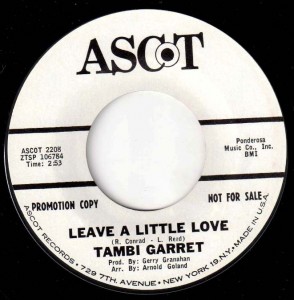 I’d love to tell you where she went from there, but information from that point on is very scarce. I’m not aware of any records after 1966, and have not been able to find out where life ultimately led the pretty redhead and polio survivor. It is my hope that somebody who sees this will be able to fill in the rest of the Tambi Garret story. There has to be more.

Now that you’re here, please check out the OTHER POSTS on the Savage Lost blog.