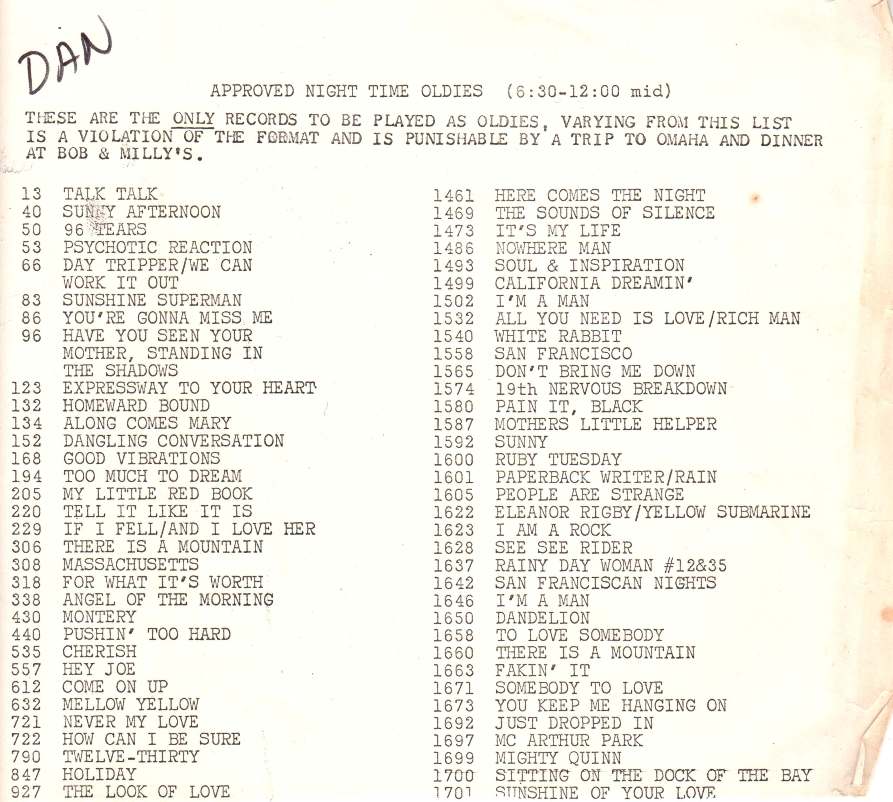 Half of the list of oldies that WQAM disc jockeys Rick Shaw, Johnny Knox, and John Paul Roberts were allowed to play.

Here’s another golden flashback from Dan Chandler’s WQAM archives! It may have seemed that the powerhouse station had an infinite supply of oldies, but in reality the selection was being tightly controlled by the time 1969 rolled around. The torn sheet that you see here makes it clear that only certain oldies could be played in the rock-intensive nighttime hours. Gone were the Dionne Warwick and Jan & Dean flashbacks that used to dominate the PM. The underground was happening, and the station wanted to make sure its hipper teen listeners didn’t bolt for the competition.

While the use of a list might seem (on the surface) like excessive control, it actually made sense for the times… and to be fair, this is an awesome list: The Seeds, 13th Floor Elevators, Leaves, Music Machine, Love, Yardbirds, Them, Count Five, Electric Prunes, Animals! While others were distancing themselves from what we’ve come to know as ‘60s garage, WQAM was embracing it! As a 12-year-old listener, I sure didn’t know that restrictions were in place. Since the bottom half seems to have disappeared, we can only guess what was on the rest of the list, but if it’s anything like what we see here, the music’s energy definitely matched that of the jocks and the station in general. (I would bet the K-Otics’ version of “Double Shot” made the cut, since I remember hearing it all the time.)

You might notice the inside joke about “a trip to Omaha and dinner at Bob and Milly’s.” Bob and Milly were Mr. and Mrs. Storz, Sr. ( the station owners), and according to Dan Chandler, the Omaha quip was a running joke around the station. Thanks again to Dan for sharing yet another part of Miami radio history.

** You can read much more about WQAM and Dan Chandler in the book Savage Lost: Florida Garage Bands, The ‘60s & Beyond.