If ever there was any doubt as to whether the rivalry between radio stations WQAM and WFUN was for real, the following memo should put those questions to rest. The rivalry wasn’t just real – it was intense – and grew to monumental proportions after WFUN’s Morton “Doc” Downey’s dirty tricks on WQAM program director Charlie Murdock (as covered, in depth, in chapter 35 of Savage Lost).

When Downey and Murdock both left the Miami airwaves in 1965 – during the very same week – it didn’t end the bitterness between the two stations. WQAM had the better signal, by far… but WFUN had the audacity, the moxie, the chutzpah, and would have stopped at little to try to dethrone their cross-town rivals.

A 1966 libel suit against WQAM – filed by Hialeah Mayor Henry Milander – was like a gift from heaven for the WFUN Boss Jocks and their Sunset Drive sales staff. Someone at FUN copied a Miami Herald article about the lawsuit, and sent it to every client and agency that bought time on WQAM. It put the QAM Tigers in a tough spot, since the station had admitted it made a mistake in the Milander report… and couldn’t really deny it. In the memo, the staff is urged to “keep our heads up”, and “not let it bother you”… along with a reminder that “our image is too good to be tarnished by this type of nonsense.” 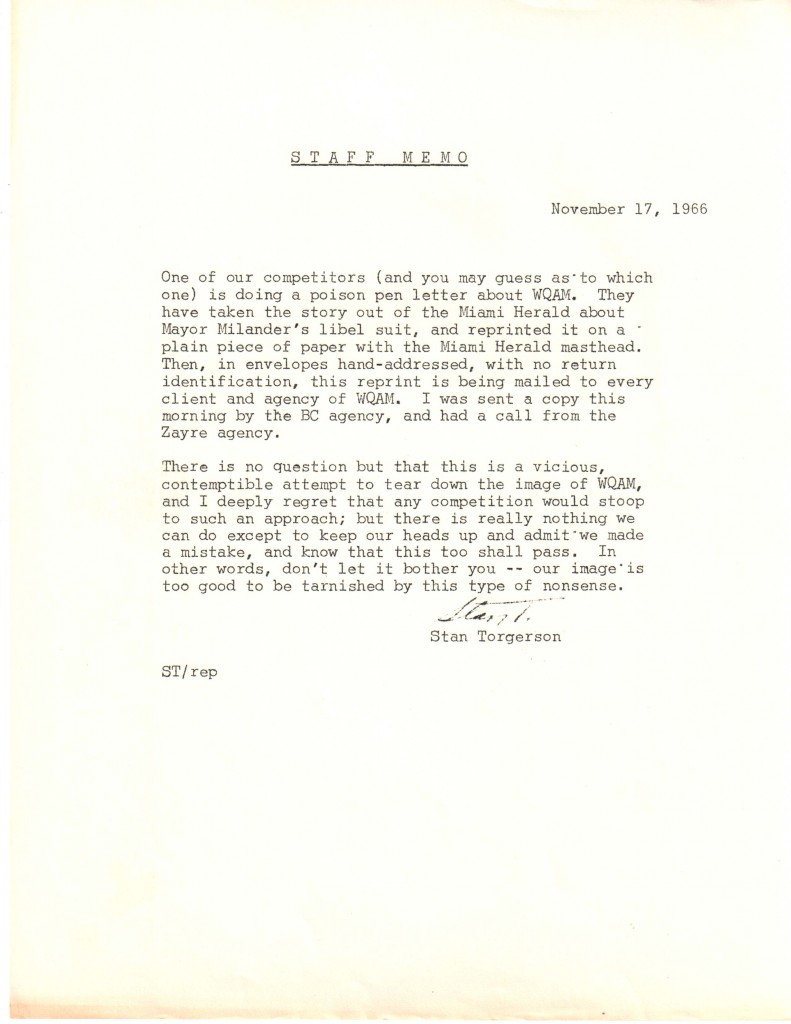 The Miami Radio Wars, heating up in 1966

Station manager Stan Torgerson (later the voice of the Ole Miss Rebels) was right. WQAM survived the incident, and their image was just fine. But you can see how the rivalry had grown, more than year after Downey gave out Charlie Murdock’s home phone number on the air. You can see how the bad blood between the stations was going to mean having to outdo one another – time and time again – and how that benefited listeners, through better contests, wilder promotions, and more support for local bands.

This memo is one of many WQAM souvenirs from the collection of former program director Dan Chandler. Dan has graciously shared his collection with me, and with the readers of this blog. Look for many more 560 Souvenirs in the months to come. Thanks, Dan, for all you’ve done, both on the air and off.