By 1966, nearly every town had countless bands that were well-known at their local high schools and dance halls, but were pretty much seen as nobodies everywhere else.   Bradenton, Florida had it share of bands, some of whom sported members that went on to bigger and better things:  The Thunderbeats with Larry Rhinehart (Captain Beyond, Iron Butterfly), Ken Forssi (Love), Mack Doss (Classics IV), and Bobby Shea (The Tropics);  the Swingin’ Saints with Dickie Betts (The Allman Brothers Band) and Gary Myers (author of Wisconsin music history books);  The Gap, who managed to record for Laurie Records out of New York.   But most local bands were more like the Off Sets, Nite Litez, or the all-girl She’s, known to the hip local kids but pretty much anonymous everywhere else. 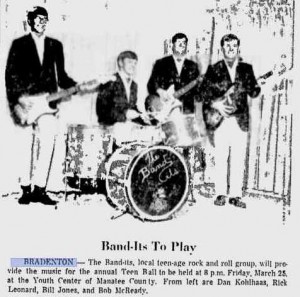 The Band-Its, from the Sarasota Herald-Tribune, March 5, 1966

Falling into that latter category:  The 4 Keys, also known as the Band-Its, a four-piece group made up of Manatee High School students/graduates.   Fortunately the guys stayed together long enough to record an excellent single, “One Way Street” b/w “Morning”, for the Century label.    “One Way Street” was inspired by the Beatles’ “Paperback Writer”, and is the story of a guy who vows never to love, and never to care.  “Morning” is a nice jangly tune that reminds me of the Non-Pareils, from just a tad north in St. Petersburg.   This one’s right up my alley, with the lyrics – “will I find someone to love me, or will I find someone to hurt me?” – giving this a moody vibe.   This is a record I would love to have, but unfortunately it’s eluded me all these years.   If someone out there has a copy they’d be willing to sell, I would definitely make it worth their while. 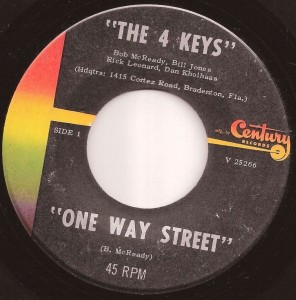 The band – Bob McReady and Dan Kohlhaas on guitar, Bill Jones on bass, and Rick Leonard on drums, continued to play well into 1967, but when Leonard and McReady were drafted, that was pretty much the end of the band.   At least three of the guys wound up serving in the Air Force, before going back to school and getting degrees in different fields, including biology and business administration.   While the guys stayed in touch, the 4 Keys would remain just a memory from the past – a fact that became sadly clear when Rick Leonard passed away in January 2007.

It’s been more than 45 years since the 4 Keys recorded their one and only single, but through the internet and blogs such as this one, their history will live on.    Here’s hoping more copies of their record will turn up, and more people will be exposed to four boys from Bradenton who made such a joyful noise.

The Band-Its, from the Sarasota Herald-Tribune, March 5, 1966

(Click on the images to view them full size)

Be sure to check out the other posts on the SAVAGE LOST blog.