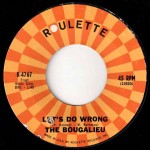 1-2 Bougalieu! The cleaner version of this classic 45.

What is an Albany, New York group doing on a blog about Florida bands?

Well, for one thing, I love the Bougalieu’s record – both versions of it. Love it a lot! But more importantly, this is a band that relocated to South Florida for a time, ‘til it was clear that the end of the road was near. It’s a band that mingled and played alongside some of the most legendary Miami bands of the late ‘60s, most of whom probably didn’t know about the awesome record that the guys cut back in their home state.

What can I say about “Let’s Do Wrong” and “When I Was A Children”? I could tell you what the lyrics to “Let’s Do Wrong” mean, but frankly, they don’t make much sense – and that’s good. The rapid fire, tough to understand words make this sound really menacing, and very, dare I say it, punk. There are two versions of the song. One is much shorter, with the words less slurred. On the other the words are nearly indecipherable, and there is a cool psychedelic change at the end of the song that is nothing short of brilliant. 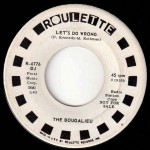 The much cruder version of “Let’s Do Wrong”… and it’s about 30 seconds longer than the time shown on the label. Click to view the full size image

60s garage band collectors are in agreement about “Let’s Do Wrong” – particularly the longer version – but there is dissension when it comes to “When I Was A Children”. One blogger called it “a pretty forgettable, middle-of-the-road pop song”, and group member Bill Gallagher agrees with that critique. While “Children” sounds tame when compared to the other side, it is anything but forgettable, or middle of the road. It’s one of those tunes that sounds better with repeated listenings, and in fact, sounds weirder each time, especially the part where vocalist Parker Kennedy shouts “can’t you see I want to be free-eee-ee-ee-kay?” Yes, ladies and gentlemen, the award for the best use of the word “freaky” goes to the Bougalieu! WTRY in Albany must have agreed, as did its listeners, who pushed the song into the local top ten. When the record started getting played in Florida, the band decided to head south and check out the action there. After all, it was January, and cold back in Albany!

Marshall Brevitz, the legendary promoter and club owner, was impressed with the band, and booked them alongside Blues Image at Thee Experience in Miami’s Sunny Isles area. With the new locale came a new name – Corners of the Heavens – and lots and lots of problems. Parker Kennedy hurt himself screaming on stage, and needed a hernia operation. The band had commitments, so they replaced him with Eddie (Walter) Saxe, another guy originally from Albany. What happened next is the subject of a lot of controversy and anger among band members, thanks to several mistakes that were made, including the band blowing a chance to open for The Who at Fort Lauderdale’s Code One club. (Their loss was the New York Square Library’s gain.) Sadly, former band members are still angry about this period of time. It’s not my intention to open up, or revisit old wounds, just to acknowledge a period in this band’s history that’s typical, in its way, of what a lot of bands went through – depression, prison time, a drug bust, etc. Corners of the Heavens/The Bougalieu headed back to Albany, playing their final gig at a state fair. Three of the guys formed a new band – Friends of Whitney Sunday – which relocated to Philadelphia, and wound up recording for both Capitol and Decca Records.

The Bougalieu/Corners of the Heavens recorded two demo tracks prior to calling it quits. “Aquarian Age” and “Of Thee I Sing” both feature Hendrix-influenced guitar, and show a much heavier side to the band. You can hear both tracks on Michael (Rothman) Havelin’s site.

While the Bougalieu wasn’t mentioned in Savage Lost, they played alongside many bands that were — and their great record on Roulette is every bit as good as Florida’s all-time greats. The guys that wanted to do wrong, and wanted to be freaky – no, wanted to be “free-eee-ee-ee-kay” – managed to make their mark… and escape the cold. I’m sure glad they did.

Some of the Bougalieu’s music is available on the CD “Psychedelic Microdots Volume 3”.

While you’re here… check out the other posts on the SAVAGE LOST BLOG.