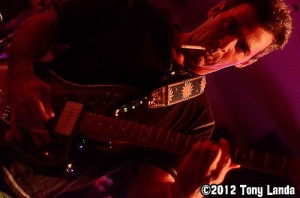 Dan Hosker on guitar. Thanks to Tony Landa of the bands Humbert and I Don’t Know.

He was the best guitarist I’ve ever seen. Not the flashiest, not the fastest. He didn’t shred, though he could have if he wanted to. There was nothing he couldn’t play, and very few types of music that he didn’t listen to.

Dan Hosker’s death on Saturday, August 11, 2012, was not a surprise. When he was moved into hospice care, everyone knew the end was near. That didn’t – and doesn’t – make it any easier to accept. Dan wasn’t just a great guitarist. He was also a great guy.

I first met him in 1990 while digging his band, the Holy Terrors, at Churchill’s. He was the first member of the band I had the nerve to speak to, and immediately I knew this was someone who appreciated the folks who appreciated him. It was the 7th of what would be 87 Holy Terrors shows for me – not counting several reunions over the years. The band was great, but it was Dan Hosker who was their pilot. Rob Elba was the leader and a hilarious frontman; Sam Fogarino (now with Interpol) was one of the most powerful drummers I’d ever seen. Frank Labrador, and then William Trev, were aces on the bass, but Dan was the maestro – the conductor – the glue. It wasn’t very long before we became fast friends.

Dan could get intense when it came to the music, but it was never totally serious. I remember playing hacky sack outside of Churchill’s one night, with Dan and Addy Burns of the band Quit. I remember thinking that night of how special our scene had become, and how close so many of us were growing. I never had to be asked to attend a Holy Terrors show. I wanted to go. To every one of them — just like with the Goods, Kreamy ‘Lectric Santa, the Stun Guns, and several more South Florida bands that were my soundtrack of the ‘90s. The bands and the music were special, for sure, but it was the guys like Dan that epitomized the support we had for one another. It was only natural that he’d go on to have side bands with many of his friends from the scene. The Holy Terrors had to come first, but Dan could play anything, and wanted to stretch out. At one point he was in four bands at the same time, and by the end of 1996, it would get to be too much.

I was in one of the those bands with Dan. We were called the Hivebuzzers (as in “I’m a king bee, buzzin’ round your hive”) and we played my favorite style of music – ‘60s garage punk. At the time we were the only band in Miami playing that style of music. Our second gig was nearly a disaster. Our drummer, Tim Vaughn of Kreamy ‘Lectric Santa and the Feebles, told us he couldn’t make it – at the last minute. I thought we’d have to cancel our gig, but Dan insisted that the show must go on – with him on the drums. We’d never rehearsed with Dan on the drums. He didn’t need a rehearsal. Dan just stepped in and played every one of those songs, never missing a beat. It was tough having to give up our lead guitar player for the night, but if there was ever any doubt of Dan’s versatility, that was the night that sealed the deal. This dude was a major, major talent.

(Dan Hosker, with the Hivebuzzers)

Dan was probably the only local musician to open for three national acts, in the course of a single week… with three different bands! Harry Pussy opened for the Irving Klaw Trio; our band opened for Man Or Astroman at The Terrace in Fort Lauderdale; the Holy Terrors opened for, I think, the Pretenders, though I’m not completely sure of that after all these years. All three of those bands were so different from one another, and Dan had to constantly switch back and forth between styles and mindsets. Soon afterwards, he told me he didn’t have the time to continue in the Hivebuzzers. We talked about getting a new lead guitar player, but it was clear that Dan was the guy that made the band. We all looked to him to “conduct” us. I had little experience as a lead vocalist, and looked to Dan for cues, and noticed several other members looking to Dan for the same. You just can’t replace a guy like that.

Dan’s life was music. He continued to play in several bands, including Boise Bob & His Backyard Band, who played that fateful night in May when Dan was struck by a car on a busy highway. For 84 days, he fought for life… but even as his body showed signs of healing, his brain function had failed, and the hope we all had was fading. Dan Hosker is gone. Just 46 years old. Rest in peace, old friend. 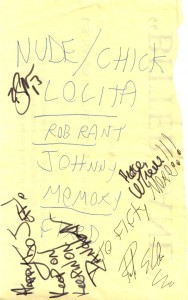 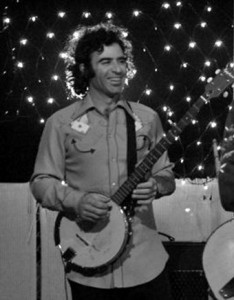 Dan Hosker will always be a star. From Dan’s Facebook page.