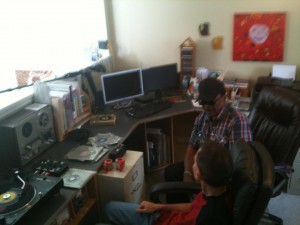 It’s not every day that a living legend walks through your door.

If you don’t care about Florida soul music, then the name Willie Clarke probably means nothing to you. But if you love the sound of southern soul, full of energy, emotion, and of course, “that driving beat”, then you understand what I mean. Willie Clarke & Clarence Reid are our Gamble & Huff. Our Holland, Dozier, & Holland. Our Dan Penn & Spooner Oldham.

I first met Clarke in January 1985, while researching my book Savage Lost. Four years removed from the fire at TK Productions, and the bankruptcy of that once dominant record company, Clarke might as well have been a million miles from his glory days. He was once again Mr. Clarke, the junior high school art teacher, who would gladly tell you about his early days with Deep City, Lloyd, and Reid Records, or his gold records with Betty Wright and Gwen McCrae. But few people were asking then.

It took time, a new generation of beat diggers, and Europe’s rabid Northern soul fans to bring the writer-producer back into the public’s eye. First came the Numero Group’s two volumes of Deep City and Lloyd tracks, issued as part of their Eccentric Soul series. Then, at my suggestion (with a little begging and pleading), Clarke made an appearance at the 2011 Soul Trip USA event in Miami. Next came a panel on record-making in South Florida, at the Miami Art Museum, which this writer and Miami’s godfather of soul, Henry Stone, were also a part of. Buoyed on by the renewed interest, the guys at Crown Street Films approached Clarke with the idea of making a documentary about his early days – the labels, the artists, the challenges of being Miami’s first black record company owner (with his then-partner Johnny Pearsall). The movie’s producers have a deadline they have to meet – the end of September – with a commitment from PBS already in hand, and more commitments sure to follow. This is something I never could have imagined when my book (which included Willie Clarke, of course) was met with mostly indifference in Miami back in 1992. People were too obsessed with dressed-to-be-seen divas to notice the treasure that was right in their own backyard.

The highlight, for me, of last week’s movie shoot was my one-on-one time with Clarke, going through stacks of my old 45s as he reacted to labels and artists that he had not thought about in decades. I can’t describe what the man’s face looked like as he eyed the first record he’d ever produced – on the Orange and Green label – a 45 he’d pretty much forgotten about over the years. Soon, he came to remember who the singers were, and I have to say what he remembered blew my mind. You can bet I’ll be writing a lot more about this, once the ultra-confusing loose ends are finally sorted. 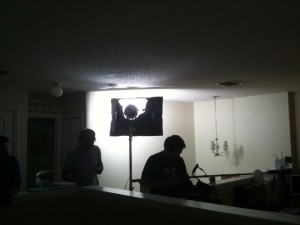 The movie crew spent more than seven hours at my house, shooting way more material than they’ll ever get to use. They have a daunting task ahead, with more interviews to conduct, and very little time to bring it all together. I’m confident they’ll be up to the task, and those of you who are able to watch the regional PBS showing will enjoy what you see.

The documentary is called “Deep City: The Birth of the Miami Sound”, and the first airing is scheduled for Tuesday, March 11, 2014, at South By Southwest in Austin… followed by the Miami International Film Festival three nights later, on March 14 (8:30 PM, at the Olympia (Gusman) Theater.)   If you love soul music, you will not want to miss this.