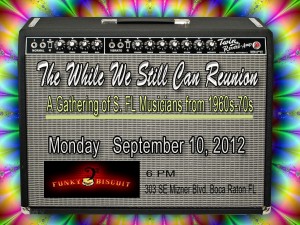 “Gettin’ together is better than ever.” – Richie Cordell

150 or so players from South Florida bands of the ‘60s and ‘70s plan to get together in Boca Raton, on September 10, 2012. The event is the third While We Still Can Reunion… and there’s a good reason why its organizer gave it that name.

I attended the first While We Still Can Reunion, back in July 2006. Some of the folks I spoke with that night included Jamene Miller from Fantasy, Don Goodson from the Echoes and the Invaders, Johnny Hartigan of the Mor-Loks and Truth, and Bob Abernathy of the Las Olas Brass and Hard Knocks. I mention those four because they are no longer with us. All of them have passed away since that wonderful summer night. 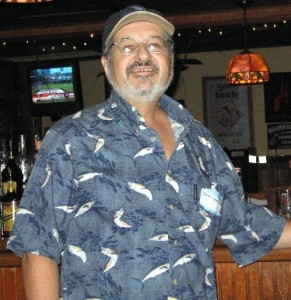 The late Johnny Hartigan of the Mor-Loks, having a great time in 2006

The highlight for me was seeing the smile on Johnny Hartigan’s face, as he reunited with his fellow Mor-Loks for the first time in ages. Hartigan had been battling cancer, and everyone knew he was in poor health… but for that night, he was on top of the world. For that night, his smile was that of a young, healthy guy, just aching to get on stage and play like he was 17 again. For Hartigan, that night was worth all the gold in the world. That’s the power of these reunions. It’s not about who plays the best, or showing off your chops – in fact, going all virtuoso tends to spoil some of the jams. It’s all about having fun. It’s all about seeing people you haven’t seen since your teens. For non-musicians, it’s about talking to these guys, and either reminiscing with them or learning from them. There is something for everyone, and the sad truth is, the number of reunions… and participants… will be dwindling. The sad truth is… nobody is getting any younger. 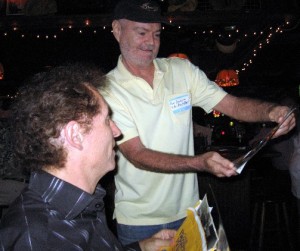 Don Goodson (right) and Don Fedele of the Echoes, enjoying some of the band’s memorabilia

Now is the time to dig through your attic and get out those old scrapbooks and local band 45s. Some might say that’s living in the past, but I completely disagree. Connecting to wonderful days gone by is what’s needed in our present times, amid all the stress so many are facing, be it financial, health, or what-have-you. Deep inside, we are still those young, idealistic kids who were going to take the world by storm, with rock ‘n roll as our soundtrack. While we still can, we can… and we will.

Unlike Geezerpalooza, which featured reunited bands performing, this is more of a jam atmosphere. It’s possible that not everyone who wants to play will get to play. (This usually holds true for guitar players. Drummers tend to be in shorter supply.) If you don’t want to play, that’s fine too. Just stop by and say hello. Take some time to appreciate old friends, since you never know who might not be around for the next reunion.

The While We Still Can Reunion takes place on Monday, September 10, 2012, at the Funky Biscuit, 303 SE Mizner Blvd., in Boca Raton, Florida. Doors open at 6PM. For more information, contact Ray Lenahan at alldigitalray@yahoo.com.