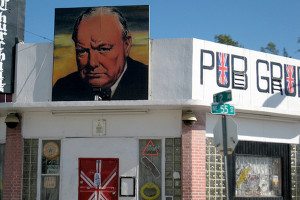 It’s unusual to see a requiem for a place that still exists.   You can still go to Churchill’s in Little Haiti, order a brew, and watch a band with no commercial potential do its thing.   You can still struggle to find a parking space and have a close encounter with one of the less-than-lucid area residents.   To an outsider, it would seem as though nothing has changed.

But it has — and will continue to do so — now that owner Dave Daniels is out of the picture.   Churchill’s lives on, but there are reasons to believe that the legendary dive’s glory days might be behind it.

By now you probably know that any South Florida musical act that’s worth seeing has played Churchill’s over the past three decades.   There have been many eloquent articles and blog posts about the Churchill’s experience, and I would suggest an internet search to read as many of them as possible.   Everybody has their own memories of nights on end spent at Churchill’s Hideaway, and of course I am no exception.

I’ve seen my share of freak shows and my share of fights — some of them on stage!    Monoman and his Lyres played Churchill’s in 1988, and wound up cutting their set short after an on-stage shouting fest.   Some nights ended in barroom brawls, or worse — such as the time someone was shot outside the club in 1996, during a set by Redneck Donut Assembly.   We all remember the weird things that happened at Churchill’s, but not every show turned into a Jerry Springer festival.   Churchill’s is where rivals became friends, and where long broken-up bands got back together.   It’s where Hialeah band I Don’t Know played what was supposedly their farewell performance, only to remind the audience of the date:   April 1st.   It’s where a King Friday show turned into a Quit show, signaling that Miami’s popular pop-punkers were back together again.   It’s where the ghost of the long-departed Trash Monkeys would appear nearly every Friday the 13th, on a night that usually included some combination of Kreamy ‘Lectric Santa or the Stun Guns. 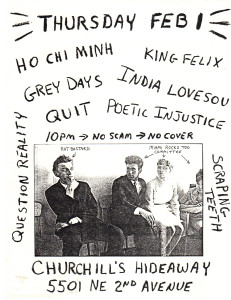 We learned to expect the unexpected on Thursday nights at Churchill’s.  Click the image to view it full size.

Thursday nights at Churchill’s belonged to Rat Bastard and bands that weren’t on the A-list at most other area clubs.   You could catch the very early Holy Terrors, the Naughty Puritans (pre-Cell 63), Insanity Assassin (with Bobby Johnston from Load), and India Lovesou, which would morph into Marilyn Manson & the Spooky Kids.   I remember asking Rat for the name of one of the performers — a young woman — and he told me it was “Marilyn Manson”.   That was a rare performance by Cindy Dietz as the enigmatic character, before a writer for Tonight Today magazine named Brian Warner became known as Mr. Manson.   It was still a few weeks before Warner and the Spooky Kids’ official debut, with the Goods, in April 1990.    One guess where that historic night took place… 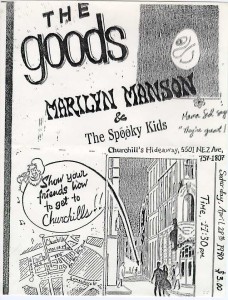 The official debut of Marilyn Manson & the Spooky Kids… with the Goods… at Churchill’s.  Click the image to view it full size.

You really couldn’t count the number of bands that made their debut at Churchill’s.    I saw the Mavericks several times in late 1989, back when half the band was comprised of members of Nuclear Valdez.   After the Mavericks signed with big bad MCA Records, they returned to Churchill’s to shoot their video for “Hey Good Lookin'”.   To make it look like a country bar, someone put a giant marlin on the wall in back of the stage!   I was one of the dancers during the shooting of the video, but never made it to the finished product.    True to the name of the song, only the good looking ones made the cut. 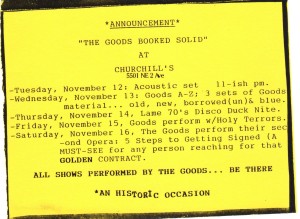 Sid King, big red Tonka trucks, and keeping the rubber side down became familiar phrases, thanks to the Goods, who also made their official debut at Churchill’s.  I’ve never seen a combination of band and club that clicked as much as the Goods-Churchill’s connection.  At  one point in November 1991, they played the club five nights in a row, with a different theme each night (including the first-ever public performance of their rock opera “Five Steps To Getting Signed”.)   When they left for California, and when they returned three months later, they received their farewells… and welcome backs… at that pub in Little Haiti.   I haven’t even mentioned “The Good Ole Goods”, “Pud”, or the other wacky alter egos they trotted out on that stage.   If you get the impression I could go on and on about their history at the club, well yes I could.   But you get the idea.   Churchill’s was a place where bands could throw out their set lists if they chose to, and pretty much do what they wanted — a concept that would have been a deal breaker in most other clubs. 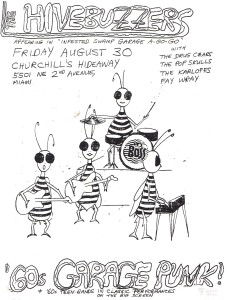 The first public performance of the Hivebuzzers, at Churchill’s.  Click the image to view it full size.

Churchill’s is where my garage punk band, the Hivebuzzers, played its first two shows.   Dave Daniels liked us a lot, and advertised our second show before we knew we’d be able to play it.   When our drummer (Tim Vaughn from Kreamy ‘Lectric Santa) told us he couldn’t make it, the show had to go on — with lead guitarist Dan Hosker moving to the drums, and his Holy Terrors bandmate William Trev moving to lead guitar.   Of course we never rehearsed that way, and it was clear we’d be more loose than a long neck goose.   But this was Churchill’s.    The show had to go on.    If you wanted technical proficiency, you’d go to the Button South.    If you wanted ferocious rock ‘n roll energy,   this was the place to be.

Not everyone felt comfortable on South Beach.    Even though there were some dives that offered DIY shows (the Egghouse and the Junkyard, to name just two), it was still South Beach.   Velvet ropes and dressed-to-be-seen divas were all over the place, and even though we loved Washington Square and supported it completely, there just seemed to be a different kind of attitude to the area in general — one that looked at punks as “less than”.   Punk — and Churchill’s in general — seemed to attract the kinds of kids that while in school, never got to sit at the cool table.  Yet as the scene gathered steam, it became a real feather in their caps to get to play a punk night at Churchill’s.  In my book Savage Lost, I talk about how joining a garage band in the ’60s elevated average kids into weekend stars, and how it gave them dignity they could never find while struggling through the school day.   It was pretty much the same thing here, as these misfit kids — the ones who would never be picked for teams, athletic or academic  — managed to create their own cool table.   Yes, we realized, we can do our own thing, and move that cool table to the place where those bands — OUR bands — were playing.   And this time, no one would be telling us we couldn’t!

One of my favorite Churchill’s memories happened outside the club, during the Music Generated By Geographical Seclusion & Beer  CD release show in May 1993:   a simple game of hacky sack with Hosker and Quit frontman Addy Burns.   As we stood outside the building, bouncing that sack around on a perfect spring evening, it occurred to me how special moments such as these were.    It occurred to me that there was a special bond between the bands, the club, the fans, the dj’s, the writers.    We all wanted our little scene to succeed.   The New Times, XS, WVUM, Yesterday & Today Records, Open Books & Records, and dozens of fanzines were helping things along, but where would it have been without Churchill’s?  In an area where dress codes and high admission costs were the norm, this was an oasis.    There would be other dives, and we’d enjoy those, too, but this was the constant.   And yes, we had Dave Daniels to thank.

The last time I saw Daniels was when he opened up the bar to what was then known as the Southeast Soul Club.   This was Miami’s first taste of a UK-style Northern soul night, where dj’s played rare soul 45s (original vinyl only) while dancers did their thing.   For Daniels, who’d taken part in Northern soul nights back in his native England, this was a return to his roots.   It was an interesting night for me as well.    I had gone from a fan who hung out watching the bands, to someone who booked some shows there, to a brief stint as a performer.   I came back to spin discs that night, but it would be my only trip to Churchill’s since moving away from Miami.   I hated to miss all the “Farewell to Dave” shows, but there was just no way around it.   As George Harrison once told us, “life goes on within you or without you.”

Churchill’s lives on, but I’ve been told there are changes in the works.    We initially feared the worst when the new owners announced a 21-and-older policy.  Fortunately, that has been reversed.   (It’s the college aged kids that do so much to support local scenes.    They’re the ones playing the bands on college radio, writing for fanzines, and promoting them via social media.    They are crucial to the health of a local scene, helping bands that want to go to the next level  reach their goals.)    Even with changes on the way, it’s only fair to give the new Churchill’s every chance to succeed.   The new owners deserve that much.    It’s either that or the prospect of something I hope I never see:  a bloody CVS on that history-rich corner.

One footnote to the story:  The history of Churchill’s will be preserved in a film called Little Haiti Rock City.   As of the July 4th weekend, the film’s producers have met their financial goal on Kickstarter.   Production on the film — and the legacy of Churchill’s — will continue.