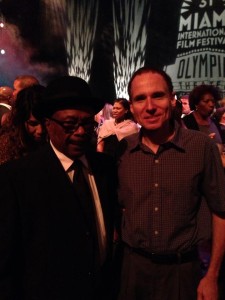 This writer with Willie Clarke, at the Miami premier of the Deep City film.  Photo by Don Shetterly

“Willie Clarke, this is your life!”

So read one of the live tweets that was shown on the big screen, prior to the Miami premiere of Deep City:  The Birth of the Miami Sound.   In many ways, it was accurate.

Clarke, as you may know, co-founded the first black-owned record company in the state of  Florida.  I’m not talking about a one-off vanity label for a friend or relative, but a serious business venture that started with virtually nothing, and ended with a stable of acts that years later would form the backbone of mighty TK Records.   The TK story will be told in the forthcoming film “Rock Your Baby”;   this film concentrates on Clarke’s ventures, prior to the number one records and Grammy win.   It’s the story of a part of town that’s been drowning in blight for decades, but once was vibrant with nightclubs, hotels, and music, music, music… and how that backdrop, mixed with the sounds of the nearby Caribbean islands, and simmered with the brassy sound of the Florida A&M marching band, came together to produce a funky Miami soul stew.

Before I go any further, it’s time for a disclosure:   I am featured in the movie, and part of it was shot in my house.   If you’re looking for objectivity about the music that Willie Clarke, Johnny Pearsall, Clarence Reid, and Arnold Albury created, you’ve come to the wrong place.   I was one of the first guys to spread the word about labels such as Deep City, Lloyd, and Reid, and provided many of the records that were a part of the Numero Group’s Deep City reissue project.    Where I can be objective, though, is in how the information was presented, and how the producers brought it all together.   To me, the most impressive thing about the film was the storytelling.  The producers (Chad Tingle, Marlon Johnson, and Dennis Scholl) more than succeeded in making the story compelling, even for those who had no idea who Willie Clarke is, or why anyone would care.   That’s why Deep City:  the Birth of the Miami Sound has been accepted at film festivals around the country (including SXSW in Austin and the Cleveland International Film Festival).  Even those who don’t give a hoot about Miami records from the 1960s will find this documentary fast-paced and interesting.   That’s a real credit to the crew, who managed to make this part of Florida’s musical history interesting even for casual viewers.

The first artist to appear on the Deep City label was Helene Smith, who later married label co-founder Johnny Pearsall (and was inadvertently caught up in the tug-of-war that ended the label).  Smith retired from the music business, and the only singing she had done in years had been in church.   As she told her story to the film’s producers and listened to her pre-Deep City solo single, “The Pot Can’t Talk About The Kettle”, something magical happened:  she started singing along with the tune.    Fast forward now to the Miami premiere, on March 14, 2014.   Smith was introduced to the audience at Miami’s Olympia (Gusman) Theatre, and with a little urging broke out into an a cappella version of “Wrong Or Right He’s My Baby”, part of her Deep City catalog.  It was a priceless moment,  not only for those of us in attendance, but also for the usually shy Smith, who more than earned enthusiastic applause.  Others in attendance included Clarence “Blowfly” Reid, Willie “Little Beaver” Hale, Arnold “Hoss” Albury (Deep City’s indispensible musical director), TK founder Henry Stone, and of course the man of the hour, Willie Clarke. 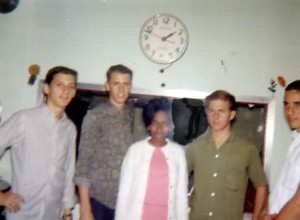 Helene Smith in the studio, 1964, at sessions for “The Pot Can’t Talk About The Kettle”. Her backing band included members of the Avengers. Thanks to Chuck Stewart for the photo.

What’s next for the Deep City documentary?   More film festivals, followed by an airing on PBS (though likely not before November).   A DVD release is also in the works.   What’s next for Deep City’s surviving artists?   More recognition, and more appreciation, something that was missing when they were young and making music that took 40+ years to discover.  Deep City is a winner.   See it.   You won’t be sorry. 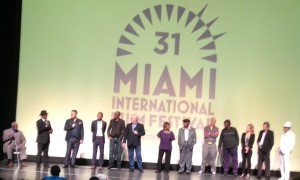 Some of the Deep City cast members & producers, including Arnold Albury and Willie Clarke on the far left. You’ll have no trouble finding Helene Smith in this picture. Click on the image to view it full size. 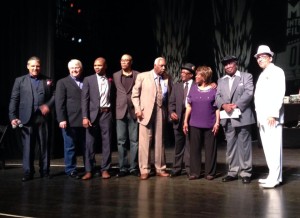